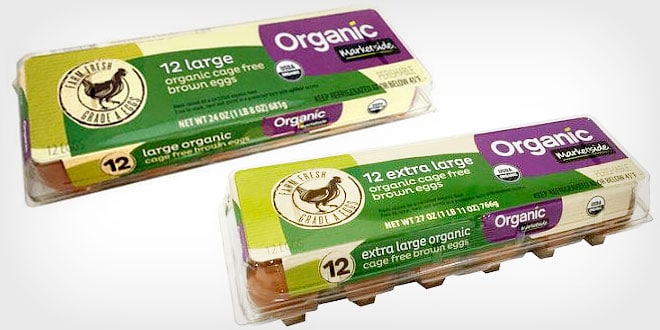 Walmart and one of its California egg suppliers, Cal-Maine Foods, are facing a class-action lawsuit alleging the two parties lied to consumers about the treatment and condition of hens laying Walmart store-brand Organic Marketside eggs, according to Hagens Berman, a consumer-rights class-action law firm.

The suit filed Jan. 8, 2018, in the U.S. District Court for the Northern District of California seeks reimbursement for consumers who paid high prices for Walmart’s Organic Marketside store-brand eggs, which were sold as being laid by hens with outdoor access.

The suit also seeks an injunction from the court to force Walmart and Cal-Maine to end their deceptive marketing of Organic Marketside eggs.

Reuters news agency reported that Wal-Mart had not reviewed the allegations, but was taking them seriously. “We hold our suppliers to high standards and are committed to providing our customers the quality products they expect,” spokesman Randy Hargrove said.

According to the class-action lawsuit, Walmart and Cal-Maine knew the hens were, in fact, confined inside industrial barns with enclosed porches, never able to touch the soil or vegetation surrounding the barns. Cal-Maine is the largest producer of shell eggs in the U.S. and Walmart is the largest retailer in the world.

Cal-Maine is the largest producer of shell eggs in the U.S., and Walmart the largest retailer in the world.

The lawsuit seeks to defend the interests of consumers

Walmart’s Marketside brand eggs sell for $2.98, whereas its Organic Marketside eggs laid by hens with “outdoor access” sell for $3.97 – a third more.

“Walmart is the largest and most profitable retailer in the world, and it chose to knowingly scam those trying to do good with their purchasing power,” said Elaine Byszewski, a partner of Hagens Berman. “We believe Walmart and Cal-Maine knew that despite the promise of ‘outdoor access’ on the cartons of eggs they sold, the hens that laid their store-brand eggs were confined inside industrial barns.”

In a press release, lawyers reported that their investigations of a Cal-Maine egg farm revealed that less than 1 percent of the flock located at the massive Chase, Kansas egg farm were able to even look outside. The location has the capacity to house 400,000 hens.

“Our investigators have seen these facilities first-hand,” Byszewski said. “Had consumers known the truth about what ‘outdoor access’ meant – stuck inside with no access to nearby pasture – they either would not have purchased them or would have paid less.”

The class-action lawsuit adds that the majority of consumers (77 percent) have stated they are concerned about the welfare of animals raised for food, including laying hens. In addition, “more than two-thirds (69 percent) of consumers pay some or a lot of attention to food labels regarding how the animal was raised.”

The suit says Walmart and Cal-Maine knew this and exploited consumers’ concerns.