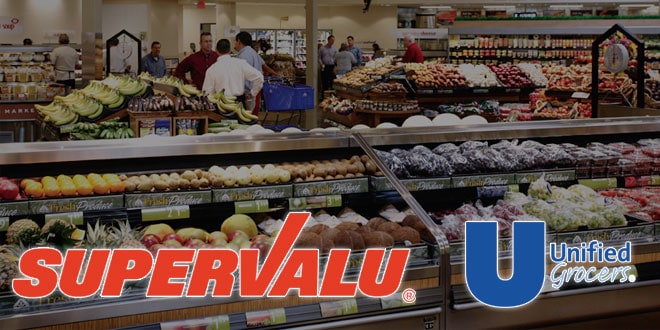 The deal is expected to close in mid-to-late summer 2017, subject to approval by Unified’s shareholders and other customary closing conditions. Following completion of the merger, Unified Grocers will be a wholly-owned subsidiary of Supervalu.

“We’re thrilled at the opportunity to bring together these two great organizations,” Mark Gross, Supervalu’s president and CEO, said in a news release.

Together, Supervalu and Unified operate 24 distribution centers supplying customers in 46 states and serve a combined customer base of over 3,000 stores with combined sales of approximately $16 billion in 2016.

“We believe this transaction will benefit the members and customers of Unified Grocers as they look for new and innovative ways to serve the communities in which they operate”, Unified Grocers’ president and CEO Bob Ling said in the news release.

Unified Grocers operate some of the country’s most exciting and progressive Hispanic and multiple other ethnic formats, specialty, gourmet, natural/organic, price impact and traditional stores. Gross stressed that “they complement our existing customer base and we look forward to facilitating collaboration and innovation across such an impressive collection of creative merchants”.

Following the completion of the transaction, Supervalu will maintain an important presence in Commerce, California, Unified’s headquarters, and throughout the West Coast, including management and employees of the combined company.

About Supervalu and Unified companies

Supervalu Inc. is one of the largest grocery wholesalers and retailers in the U.S. with annual sales of approximately $13 billion. Supervalu serves customers across the country through a network of 2,067 stores composed of 1,850 stores operated by wholesale customers serviced primarily by the Company’s food distribution business, 195 traditional retail grocery stores operated under five retail banners and 22 stores under the Shop ‘N Save name in Maryland, Pennsylvania, Virginia, and West Virginia (store counts as of December 3, 2016). Headquartered in Minnesota, Supervalu has approximately 30,000 employees.

Founded in 1922, Unified Grocers is a retailer-owned wholesale grocery distributor that supplies independent retailers throughout the western United States. Unified and its subsidiaries offer independent retailers all the resources they need to compete in the supermarket industry. Headquartered in Commerce, California, Unified Grocers has annual sales of approximately $3.8 billion and serves its Members and customers through six distribution centers, as well as Market Centre, a dedicated specialty, natural and ethnic business. Unified owns approximately 3 million square feet of real estate.