Home » News » How Piggly Wiggly Changed the World of Supermarkets 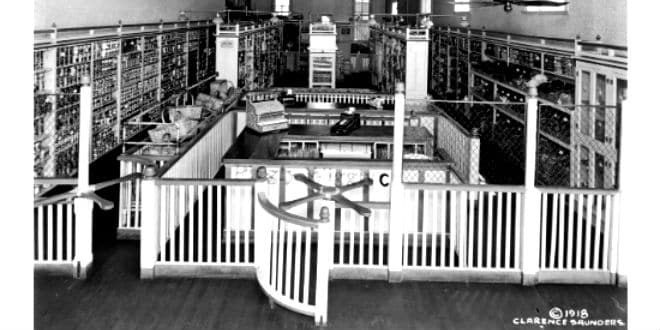 Picking up a basket while grocery shopping may seem second nature now, but the idea was once groundbreaking. And that was far from the only thing that changed when Piggly Wiggly, the first modern American supermarket, opened 100 years ago.

Clarence Saunders opened the first Piggly Wiggly on Sept. 11, 1916 in Memphis, Tenn.—after a few construction delays, which is why the company celebrates the anniversary on the 6th—and thus pioneered a self-service model that was drastically different from the way things had long been done.

At an old-style grocery, customers would pass a grocery list to a clerk, who would then put items together for shoppers in one bag. Piggly Wiggly, on the other hand, was stocked with 1,000 products. Customers entered through a turnstile and, basket in hand, followed a path through the aisles. Goods were neatly arranged with clearly marked prices, something heretofore unseen. There were even scales for shoppers to weigh sugar and other staples.

Saunders was a school dropout that took note of the inefficiencies of the grocery stores at the time. He was convinced that the reason behind the failure of many stores was behind the credit losses from customers’ charge accounts and labor costs from clerks and delivery boys.

By 1923, according to the Jan. 3, 1949, edition of Life magazine, more than 1,200 Piggly Wiggly stores across dozens of states were doing $100 million annually (about $1.4 billion today). The company hit 2,600 stores by 1932, though Saunders by then had been forced out of the company in a battle with Wall Street investors.

Saunders applied for multiple patents. His first patent for a “Self Serving Store,” was granted in 1917. At this time, imitators like Handy Andy and Helpy Selfy made their debut. Saunders successfully sued Hoggly Woggly for infringement.

While the history and legacy of supermarkets is clear, one thing is not: How Piggly Wiggly got its peculiar name. The origin remains a mystery, but when Clarence Saunders was once asked why he picked the name, he simply responded: “So people will ask that very question.”