Home » News » A Not So “Happy Hour” For Starbucks 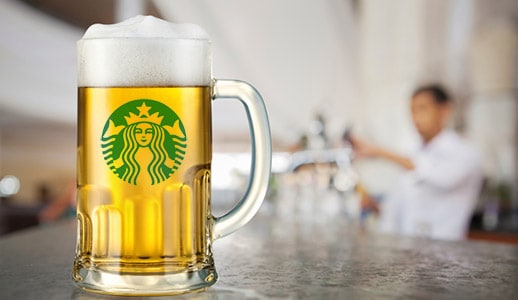 “Last call” for Starbucks (SBUX) as they announced that its sales of beer and wine and small plates food will be discontinued in company-owned stores in the United States on Jan. 10. The company first introduced the “Evenings” concept in Seattle in 2010, and then eventually expanded to over 400 stores.

Starbucks started the Evenings program to pull customers back into their shops at later times in the day and not just in the mornings. The company even had an in-house sommelier who picked wines to serve at these locations. Starbucks found that 70 percent of its customers consume wine, compared to 30 percent of the general population.

Starbucks has no plans to stop experimenting in order to increase their consumer base. Next on their list is creating high-end stores — named Roasteries and Reserves — which will cater to the burgeoning demand for super-high-quality coffee among consumers.

The Roasteries, a blend between a cafe and a roastery, is intended to be a “Willy Wonka’s Factory of coffee,” as Starbucks CEO Howard Schultz puts it. The first of these stores opened in Seattle in 2014 and it’s a place where the company’s priciest, small-lot Reserve coffee beans are roasted on site, and various ways of preparing coffee, including pour-over and siphon, are used.

Starbucks also plans to open around 1,000 Reserve stores, which are sized between the large Roasteries and smaller traditional stores. The Reserve stores will serve only small-lot premium coffees using “pour-over” and other similar brewing methods.

The company has also identified food as the next step to focus on in order to increase revenue. Starbucks currently rakes in 20 percent of profits from food sales, mainly during breakfast. But company executives want to diversify into lunch time meals as well since about 50 percent of consumers visit their stores after 11 a.m.