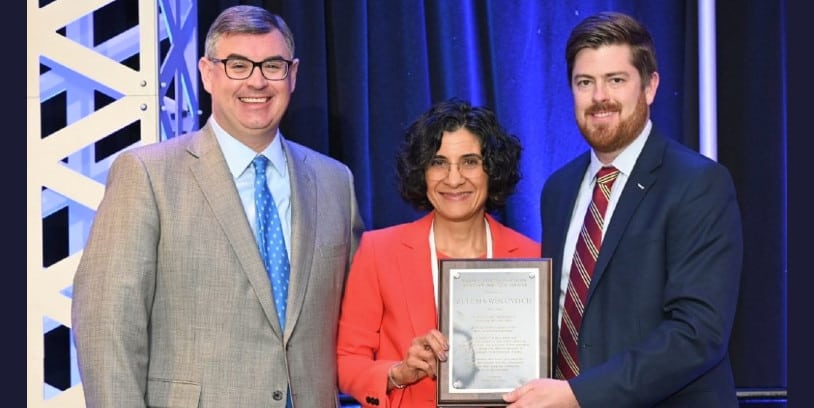 The National Grocers Association (NGA) presented the Spirit of America Award to Zulema Wiscovitch, co-CEO of Associated Supermarket Group (ASG), a company that supplies and provides retail solutions to one of the largest groups of independently owned and operated supermarkets in the Northeast and Mid-Atlantic region.

NGA’s Spirit of America Award has been presented since 1982 to individuals who provide leadership in the areas of community service and government relations and are committed to a free and independent food distribution system. Previous recipients of this prestigious award include former presidents George H.W. Bush and Gerald Ford.

“Zulema truly walks the walk when it comes to advocacy engagement, using her position and political relationships to educate elected officials on important issues that directly impact independent grocers,” said Greg Ferrara, president and CEO. “It’s because of her tireless efforts, willingness to be part of the process, and the engagement of her retailers that NGA has been able to advance our most important policy effort, reviving and enforcing the Robinson-Patman Act.”

Before joining ASG, Wiscovitch was executive director of the National Supermarket Association, a trade association representing independent supermarket owners on the East Coast.

Related Article: Technology is the Spice of Food Retailing

Prior to that position, she served in various regional marketing and corporate relations posts at Anheuser-Busch Inc. Earlier, she was vice president of Wiscovitch Associates Ltd., a family-owned public relations and public affairs agency with Fortune 100 clients.

Wiscovitch is originally from Maracaibo, Venezuela, where she graduated with a bachelor’s degree in political science from Rafael Urdaneta University. She has served on several non-profit boards, including The Mayor’s Fund to Advance New York City, El Museo del Barrio, The Puerto Rican Family Foundation, and the Hispanic Federation. She currently serves on the executive board of the National Grocers Association and the board of the Food Industry Alliance of New York.