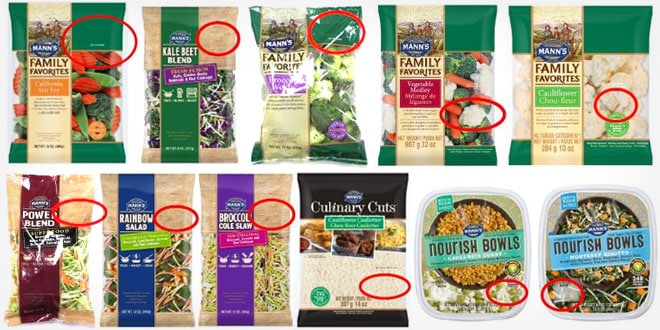 A California-based company is recalling a number of vegetable products sold at retailers ranging from Walmart to Trader Joe’s throughout the United States and Canada, over concerns about possible listeria contamination.

Mann Packing, one of the largest suppliers of fresh vegetables in the country, announced it was voluntarily recalling nearly 100 products — from broccoli florets to brussels sprouts to cauliflower and stirfry medleys — because of a single positive result found on one vegetable product during random sampling by the Canadian Food Inspection.

Listeria monocytogenes is a bacteria that causes weakened immune systems or fatal infections in young children and frail adults, according to the Food and Drug Administration. The company said in the recall notice that public health officials have not yet reported any illnesses related to these products.

Among the biggest retail recalls stemming from Mann Packing’s is Meijer’s. The Grand Rapids, Michigan based chain announced that it is recalling 39 fresh vegetable products, such as vegetable trays, broccoli florets, asparagus spears and shareable autumn harvest salads.

The food was sold in stores in Illinois, Indiana, Kentucky, Michigan, Ohio and Wisconsin and purchased Sept. 27 through Oct. 20.

Consumers who have purchased any of the recalled vegetable products are urged to discard them or return them for a refund.

“As an owner of this company and a mom, providing safe and healthy foods to our consumers and their families is always our top priority,” Gina Nucci, director of corporate marketing for Mann’s Packing, said in a written statement. “This voluntary recall is a reflection of our commitment to ensuring the safety of our consumers.”

A full list of recalled products and UPC codes are available on the Food and Drug Administration’s website.