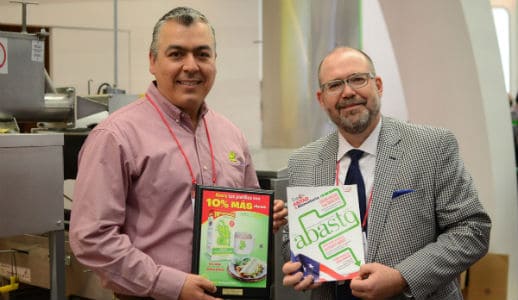 Abasto Media presented a plaque of recognition to its partners during the Expo ANTAD and Alimentaria 2016. During the event, Abasto acknowledged the support of companies that make a difference every day to increase the Hispanic food and beverage market.

Maseca, one of the leading brands in the industry was there to receive this award from Abasto Media.
Maseca is our leading global brand of cornmeal, which in addition to having succeeded in bringing through the tortilla, the taste of Mexico to the world, is an important participant in the market of Grits of corn in Europe, Africa and the Middle East.

In 1949, Cerralvo, Nuevo León was founded in the first world nixtamalized corn flour plant. Maseca was the name Don Roberto González Barrera gave to this revolutionary product, whose origin comes from mass-dry, i.e., dried corn flour.
Maseca began to position itself as a synonym of quality, but also as a basic product of the power of Mexicans.
Maseca is made of 100% natural corn and is vital to good nutrition for their high nutritional contribution, since it is also fortified with vitamins and minerals. It is synonymous with health and energy.
The tortilla is fundamental in our food so it has a strong cultural and emotional attachment. Without losing this link with the consumer, the brand has evolved to position the omelette in the world today, enhancing it as a natural, healthy and nutritious food.
Maseca has also been present in the United States for more than 30 years and today is the undisputed leading brand in the business of corn meal in the self-service channel both the industrial canal, and representing Mexican culture in the United States for the Hispanic consumer.
Has also been present since 1987 in Central America; starting in Costa Rica, later in Honduras, El Salvador, Guatemala and Nicaragua, being recognized as the cornmeal in best quality and high nutritional value.
Maseca is a global brand of Gruma, which has allowed us to bring to everyone the flavor of Mexico, through a product that translates into flavor, health and quality such as tortilla, and additionally in latitudes like Europe or Africa has carried its quality snacks, cereals and beer producers through the corn grits.
With Maseca, every day we have new challenges which we will undoubtedly take to continue growing and consolidating our position as the leading brand, globally, in the category of corn flour.