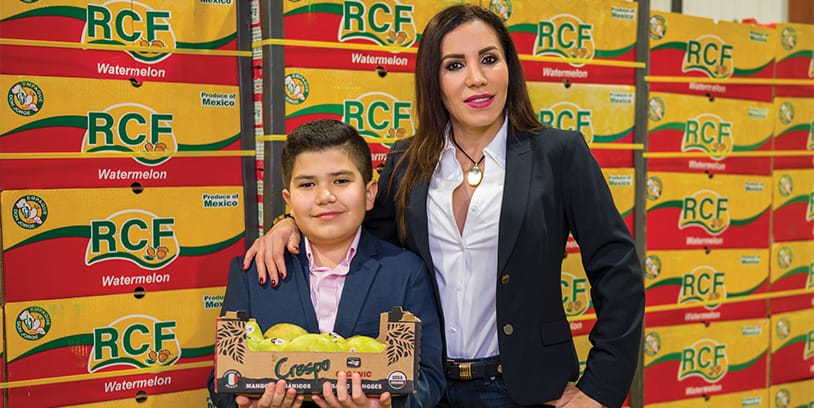 From our family to yours! With this message, RCF Distributors present themselves on their website, because they literally operate this way. They are a family business that has been dedicated to the distribution of fruits and vegetables from Mexico to the United States for more than two decades, led by Malu Crespo, president of the company, the oldest of four brothers, and the only woman.

Malu’s father, farmer Roberto Crespo Fitch, started the business around 1971 when he founded Empaques Don Jorge. Initially, they grew, packed, and distributed chili peppers, mangoes, and other citrus fruits in the Mexican market. In 1996 they expanded their operations to the United States, opening an office in Nogales, Arizona as RCF Distributors, and currently they are the fourth largest national seller of mangoes.

In an interview with Abasto Magazine, Malu Crespo spoke about the beginnings of the business and the path she followed to lead the family business from a very young age.

As a child, Crespo helped her father in the business. “At that time, I had to do the accounts for the ladies who were cutting, write down the name of the cutters, write down the kilos of the product, as well as putting me on the scale to check. I was ten, twelve years old,” said the president of RCF Distributors.

She remembers that her father wanted her to work for him full-time as soon as she graduated from high school. But her mother, Maluz Durán Valdez, opposed the idea because she considered her children’s education a priority. So Malu Crespo went to study at the Tecnológico de Monterrey on the campus of Mazatlán, Sinaloa, very close to her home in Rosario because every time she had free time she went to give her father a hand with business affairs.

When Crespo graduated from Business Administration in 2001, she moved to Nogales to take the reins of the distribution company at the age of 23, offering great support to her father, who was battling cancer. Unfortunately, in February 2007 Don Roberto passed away from the disease.

Crespo and her brothers continued with the business, which already had offices in Nogales and McAllen, and since then it has continued to grow to the point of handling nearly six million nine-pound boxes of mangoes annually, thanks to the quality of the fruits that they export, as well as the solid relationship of trust and transparency with their clients in commercial transactions.

“From the field, with my brothers we watch over the orchards, watching over the mango cutters so that they do a good job. We make sure the mangoes are packed so well that we can receive them in the cold rooms and have a good maturation so that the consumer can enjoy the mango three weeks after it was cut from the tree,” Crespo commented.

One of the latest successes of the family business was the launch of Crespo Organic, despite the fact that Malu initially opposed her younger brother’s project. “I didn’t want to because organic is another world, but we have already become organic mango distributors with all the certificates and right now Crespo Organic is one of the most recognized brands in the United States in terms of mango and we have very good sales,” Crespo said.

Now Malu Crespo’s goal is for their brand of mangoes and other agricultural products grown and distributed by RCF Distributors to go directly to supermarket chains, without having to use intermediaries, in order to achieve better remuneration for Mexican farmers who work so hard for growing high-quality fruits and vegetables that are exported to the United States.