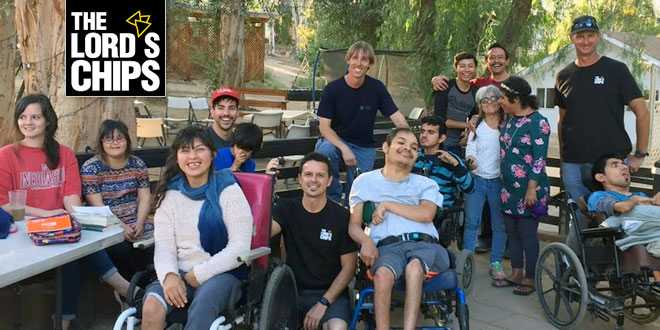 What is the relationship between a foundation called The Lord’s Chips and the Tortilla Industry Association? The answer is Daniel Brooker, a food scientist, specialized in tortillas, who in 2011 decided to create the foundation dedicated to helping orphans with special needs in Mexico.

In an interview with Abasto Magazine, the Lord’s Chips Foundation president explained how his work in the manufacture of tortillas and his relationship with Mexico led him to form this non-profit organization that has managed to change the poor living conditions of dozens of Mexican orphans with special needs.

Graduated from college, Brooker was hired by the company Chem-Mex to develop numerous ingredients that were sold to the tortilla industry. For nearly a decade this food scientist dedicated himself to developing products and solving problems, so he had to visit the tortilla factories, both in Mexico and the United States, where he met a good number of manufacturers.

Currently, Brooker has its own firm, “Food Lab”, a food label consulting for the food industry. “Tortillas are a small part of my business now, it’s like 10% of what I do now,” he said.

Although tortillas already represent only a minimal part of his work in his business, they still occupy a large space in his heart. It is through this industry that Brooker obtains money which he use to funds the campaigns of Lord’s Chips Foundation to help orphans with special needs in Mexico.

“I still go to the Tortilla Industry Association Convention every year as The Lord’s Chips because I need to keep those relationships so we can do something good together in Mexico,” explains Brooker.

The contribution of “Nacho Libre”

One of Brooker’s favorite films is the comedy “Nacho Libre”, starring Jack Black who plays Ignacio, called by his friends Nacho. He is the cook in a Mexican monastery where he grew up and is also home to orphaned children.

One scene from the film stayed with Brooker, where a monk asks Nacho where the chips are and he responds that someone stole them. Then the monk replies, “did not you tell them that those are ‘The Lord’s Chips’? ”

Out of curiosity, Brooker investigated if anyone had The Lord’s Chips domain and it was available, so he decided to buy it, hoping to use it in the future.

Two years later, Brooker says, during a church service the pastor was talking to businesspeople and commented: “In business, you are not afraid to try something and fail and do it over and over again. And he said, what if you were not afraid to fail in something that really matters.”

It was then that Brooker decided to try to do something that really mattered. He created the nonprofit The Lord’s Chips hoping that the people within the tortilla industry would offer financial support to help the orphans in Mexico.

The Lord’s Chips in action

Together, with John Swanson, the foundation’s treasurer, they set out to identify who they were going to help financially. In Ensenada, they found an orphanage that began to work and was dedicated to the care of orphans with special needs.

They realized the lack of resources available to give appropriate care to children who were born with physical and mental problems and were abandoned by their parents.

In the Ensenada orphanage lives Isabella, a girl who suffers from severe autism and was found abandoned in a garbage dump with a plastic bag over her head. “Now she’s very well taken care of,” says Brooker.

Two other children, who were tied to a bed, could not walk when they were taken to the orphanage. Last year they underwent surgery and now they can get up and walk.

In another orphanage, called The Mission, which has been operating in Mexico for 25 years, it has 15 orphans with special needs with severe health conditions. Since the beginning of the year The Lord’s Chips has begun to give them financial aid but they need more support.

“We work helping orphanages plan their budget and we are committed to helping them financially for a year,” Brooker explains.

In need of more support

Since the beginning of the foundation every year Brooker has participated in the tortilla industry conventions seeking the economic support of the manufacturers of this popular Mexican product. But he explains that it has taken years to convey the message of the need to support the work of the foundation.

Out of the total contributions they received last year, only 15% came from the tortilla industry. This led them to think about not returning to the convention, but at the annual event held last month in Las Vegas, optimism returned because the message presented by the foundation to help Mexican orphans with special needs was listened.

“Minsa CEO Rodrigo Ariceaga approached me and said, I am very sorry that in the past we have not made a contribution, I did not understand what you are doing, but it is never too late to start and I am going to give you a Check,” said Brooker, who later on received a $8,000 donation from Minsa.

Related: An Industry Unstoppable in The United States

“With all the donations we have received, we can return to Mexico to continue helping the orphans,” Brooker said.

To contribute to the Lord’s Chips Foundation and support their work to assist Mexican orphanages with special needs, you can contact Daniel Brooker by email: [email protected] or by calling (562) 537- 8177. The foundation’s website is thelordschips.org