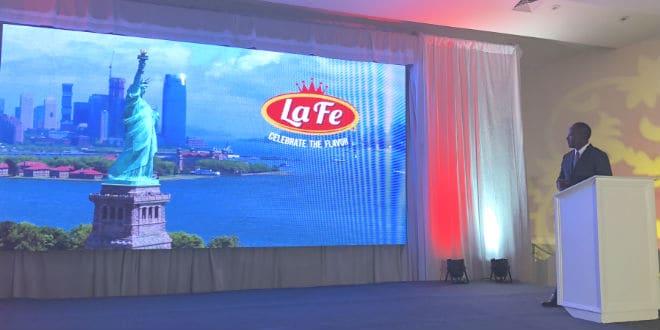 The renowned food brand La Fe held a gala to celebrate its 50th anniversary and its new plans to take the brand to a new level to conquer new markets on the East Coast and other regions in the US.

The celebration took place on May 9 at the Palisadium USA event hall in New Jersey and was attended by about 200 guests.

The celebration was held on May 9 at the Palisadium USA event hall in New Jersey, with the assistance of Derrick Reckord, President and CEO of GraceKennedy Foods USA, the company that owns La Fe, along with its executives and nearly 200 guests who are part of the food industry.

In an interview with Abasto Media, the CEO of GraceKennedy Foods USA said that for 25 years he has known La Fe and the great relationship that this brand has developed with Hispanic consumers in the United States. Since then, Reckord saw the great possibilities that La Fe had and hoped that GraceKennedy, which is a powerful business group based in Jamaica, could develop a relationship with this brand and in 2014 they ended up buying it.

GraceKennedy’s CEO added that these are the healthiest products, fresher products and that is possible when you offer a frozen type distribution. “We see that as a so much of an opportunity to build the brand to going in to the future.”

GraceKennedy Foods (USA) LLC – DBA La Fe is a full service distributor of a range of more than 1,400 products in the categories of grocery, frozen, dairy and beverages. It represents some of the top brands of food products from the Caribbean, Central America, South America and Europe. With operations located in Moonachie, New Jersey; Miami, Florida and Atlanta, Georgia serving the Eastern United States, its network of sub-distributors and wholesalers augment its direct to retail operation, allowing coverage to the mid-western states and the West Coast.

Andrés Falquez, Category Marketing Manager, joined GraceKennedy USA – La Fe in 2018. Since then, he has been leading the process to transform the brand and present its new image and position La Fe products to be favorites among Hispanic consumers in the US.

“Thanks to the union with Grace as a brand from the Caribbean, we had the opportunity to develop an excellent plan to serve those consumers who for so many years have not heard from us. What we decided to do was give a sense of strategy and give value to the brand so that capital grows and people have a sense of why they go to stores,” said Falquez in an interview with Abasto.

The executive noted that in the Northeast, from Massachusetts to the Carolinas, La Fe has sales of more than $130 million and assured that in the category of frozen Hispanic products, they are the leaders in the market. “And the idea is to continue growing much more and extend our distribution points throughout the United States.”

For Maria Herrera, owner of Hyper Foods, a food distribution company in Connecticut, the work GraceKennedy – La Fe is doing to renew its brand is important, and because of the recognition they have among Hispanic consumers, she decided to distribute their products. “Because they are Hispanic products, they are well-known and they sell a lot. What they buy the most is yucca, pigeon peas and coconut water,” said Herrera, one of the guests invited to celebrate the 50th anniversary of La Fe.

The President and CEO of The World of the Latin Cuisine, William Colón, who organizes the Latino Food & Beverage Trade Show in New Jersey, told Abasto that “we see that La Fe is entering another stage, Latinos We are growing in number and also growing as consumers, therefore we are seeing a proliferation of excellent brands and La Fe is one of them and we hope it continues to be successful”.

In June, GraceKennedy USA – La Fe, will be inaugurating its new distribution center in New Jersey, which will have the most modern technology for its operations. Also, it will have a new fleet of about 300 trucks that will be added to the 500 that are already in service to expand its direct product distribution system. According to Falquez, a new distribution of national accounts has also been opened that will allow them to extend their network of distributors to the center and the west coast of the USA.