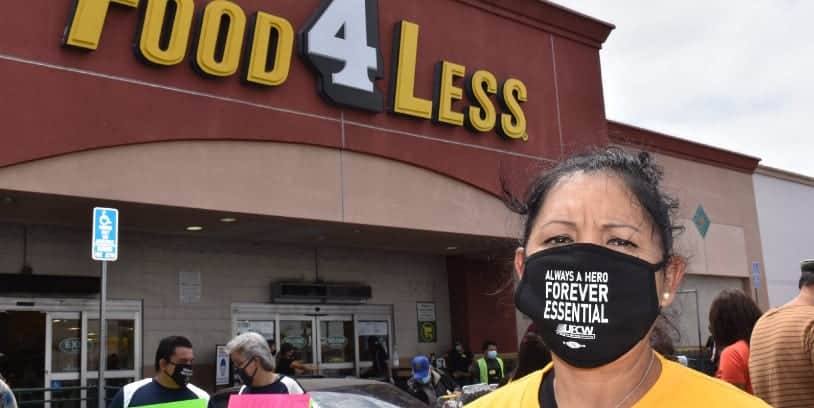 The Los Angeles County Board of Supervisors approved the “hero pay” proposal requiring grocery and drug retail stores to pay their workers an additional $5 per hour for frontline workers.

During their regular meeting Tuesday, the board passed the “hero pay” motion 4-0, with Supervisor Kathryn Barger abstaining. The measure directs county counsel to deliver a report containing an urgency ordinance that requires larger grocery and drug retail stores located in the county’s unincorporated areas to pay all of their workers an additional $5 per hour for 120 days, according to KHTS News Radio.

The measure would apply to publicly traded companies or have at least 300 employees nationwide and more than ten employees per store.

“Since the beginning of the pandemic, frontline grocery and drug retail workers have continued to show up to work despite the dangers of being exposed to COVID-19,” Solis said in a statement after the motion passed Tuesday. “Because of their work on the frontlines, families throughout the County have been able to access food and medicine they need during this pandemic.”

Barger says she abstained from voting for the measure because of “unavailable substantive information and answers, a lack of feedback from the key stakeholders involved, and potential inconsistencies in the application of a proposed pay increase that could further hurt vulnerable residents and communities.”

“I am concerned the Board is voting on a substantial pay increase for all employees, regardless of their position or salary, without taking the time to carefully consider the potential impacts of these decisions,” Barger said in a statement issued after the meeting. “Grocery stores currently report a slim 2.2% profit margin due to additional costs and supply chain issues as a result of COVID-19. Lacking any true dialogue on this issue with grocery store representatives, the business community, and other key stakeholders, we do not know if this significant wage increase could have unintended consequences to the very people we intend to help, leading to a rise in food prices and costs for our residents and reduced hours and benefits for the employees.”

The motion, called ‘Hero Pay for Frontline-Grocery and Drug Retail Employees in Los Angeles County,’ points to a growing number of outbreaks in grocery stores and the additional stress that workers suffer when they cannot consistently maintain distance from crowds of customers at work.

Related Article: Covid-19 Vaccine for Agricultural Workers is a Priority, But it Won’t be Easy

The motion also cites a study from the Brookings Institution, which found that the top, publicly-traded retailers saw a 40% increase in profit in 2020, averaging $16.7 billion, while their stock prices increased by an average of 33%.

The California Grocers Association said that the ordinance would result in higher food costs, hurting low-income families and seniors already struggling to cover those costs.

“Grocery store workers are frontline heroes, and that’s why grocers have undertaken a massive effort to institute store policies to make both workers, and customers safer,” California Grocers Association President and CEO Ron Fong said. “Many grocers have already provided workers with extra pay, bonuses, and generous health benefits during the pandemic as a supplement to the fair, competitive wages and benefits collectively bargained by grocery workers’ unions.”

Now, county attorneys are in charge of drafting the “hero pay” motion. It will be considered at the next board meeting on January 26th. If approved, the ordinance will remain in effect for 120 days.

The cities of Long Beach and Los Angeles are also pursuing similar efforts, according to KTLA News.

The Long Beach measure would provide workers at companies with at least 300 employees an extra $4 per hour for at least four months.

The city of L.A.’s measure would also apply to companies with at least 300 employees nationwide, mandating an extra $5 per hour until the county’s risk level falls to yellow, the tier with minimal risk and the least restrictions under the governor’s reopening plan.