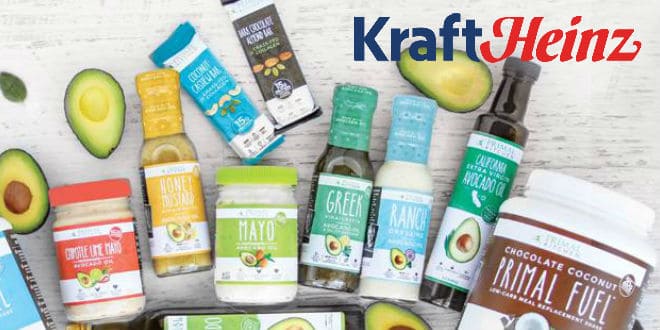 The acquisition gives Kraft Heinz, which also owns Miracle Whip and its branded dressings, a foothold with which it will look to fend off competition from upstart brands like Sir Kensington’s and Annie’s Homegrown, CNBC reported.

Primal Kitchen was founded by Mark Sisson and Morgan Buehler. The company makes paleo-friendly products including mayonnaise, salad dressings and avocado oil, with growing product lines in Healthy Snacks and other categories.

According to CNBC, paleo diets focus on foods that were available in the Paleolithic era, like nuts, seeds, lean meats and vegetables. The idea, which has gained a strong following in recent years, is that the human body is best suited to eat the foods that early humans ate rather than the modern diet, which includes processed foods.

Primal Kitchen will join Kraft Heinz under Springboard, which is Kraft Heinz’s dynamic platform created to partner with founders and brands that will disrupt the food industry. The combination of Primal Kitchen and Springboard will help to realize Mark Sisson’s vision to change the way the world eats.

The brand holds leading positions in both e-commerce and natural channels, and is expected to generate approximately $50 million in net sales this year.

Mark Sisson, Co-Founder of Primal Kitchen said, “My mission has always been to change the way the world eats. With that goal in mind, Primal Kitchen launched in 2015 to offer health-conscious consumers the best possible choices in condiments, sauces, dressings and healthy snacks. While our growth to date has exceeded all industry standards and expectations, our partnership with an industry leader like Kraft Heinz now offers an unrivaled opportunity to reach millions more of the consumers who have been seeking products like ours for years.”

Primal Kitchen will leverage Kraft Heinz’s assets and infrastructure, while still operating as an autonomous company. Based in Oxnard, California, it will continue to be led by its current leadership team.

The transaction is expected to be completed in early 2019. Terms of the agreement were not disclosed.