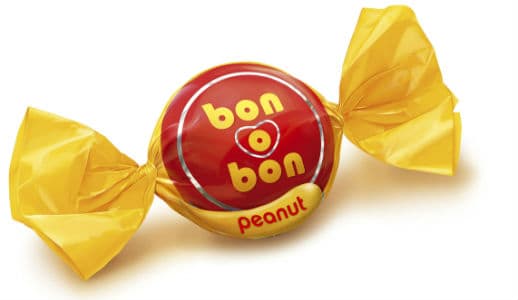 Bon o Bon was introduced in 1984 and soon after it became an international product sensation. It’s a unique combination of smooth peanut cream filling surrounded by a gentle crisp wafer which is then covered in rich milk chocolate. Available with chocolate cream filling too and other delicious flavor combinations!

This brand is one of the most emblematic brands of Arcor, steeped in history. With a unique filling and great significance of affection and sharing for consumers.

As a pioneer in establishing the week of sweetness; today it is its benchmark under the slogan “a bon bon for a kiss”

In 1984, Fulvio Pagani sought to introduce a tempting chocolate candy and that was within the reach of everyone. Thus the brand was born.
From his first steps it was seen that it would just be any other product. With bon or bon was born a new category, a bon bon in chocolate thought for everyone, young and old, to give and give.

2003-new format
A single filled choloate arrives in a format that allows it to be used for cakes, desserts or just eating it alone.
Bon o bon launches a Bonbon with its unique, now chocolate filling.

2004 20 years with bon o bon
The brands made a new redesign and launched the commercial “To give is to give”, made for the 20 years of bon o Bon.
It shows the classic give and receive that the brand promotes
And with which it is identified by all consumers.

2005 Came the ice cream!
The company joined the category that is rejoiced in the summer, ice cream. Formatted as the heart of the chocolate with a cream flavor bon o bon, and the cone that has a unique filling bon o Bon.

2013
Bon o bon is a leader in the market of chocolates at the national level and exports 70% of its production to be sold in more than 60 countries on all continents. It is a dynamic and fun brand that continues to evolve.
A Thousand I Love Yous, is the latest commercial for bon bon, which shows there are many ways to decide to express “I love you” without speaking, expressed in thousands of gestures and attitudes.