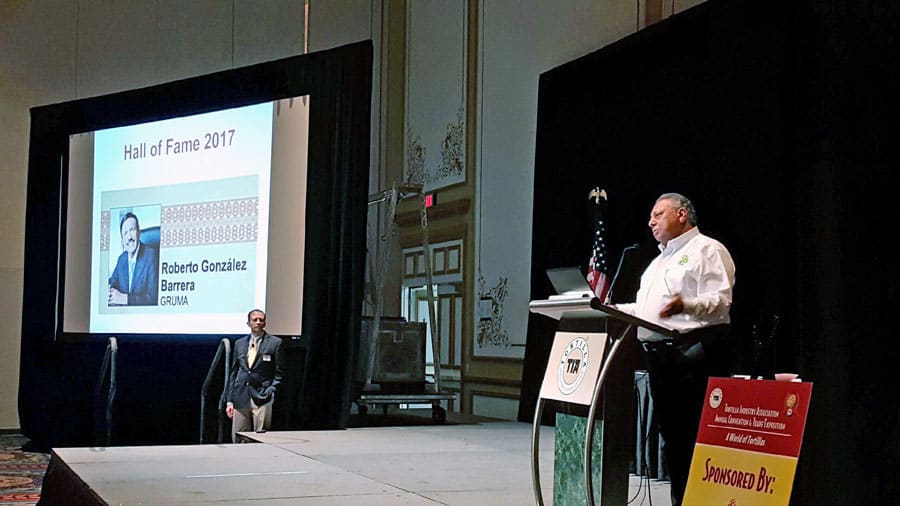 Due to his outstanding work and important contributions to the tortilla industry in the United States, the Tortilla Industry Association (TIA) welcomed Mr. Roberto González Barrera into its Hall of Fame. Mr. González Barrera is the founder of Gruma (Azteca Milling and Mission Foods), the leading company worldwide in the production of corn meal, tortillas and wraps, with operations in more than 125 countries and 80 plants all over the world. In 2016, net sales were approximately $3.6 billion dollars.

The members of TIA’s Hall of Fame are businesspeople in the Americas who are recognized for their contributions to the tortilla industry through the creation of companies, research and innovation in products, equipment and ingredients.

During the ceremony, Juan González Moreno, President and Chief Executive Officer of Gruma (Azteca Milling and Mission Foods) received the award for his 68-year-old father on behalf of the González Moreno family.

Mr. Roberto González Barrera, together with his grandfather Roberto M. González Gutiérrez, created what is today the leading company worldwide in the production of corn meal, tortillas and wraps.

González Moreno started off by recounting to Jim Kabbani, CEO of the Tortilla Industry Association, and other notable businesspeople in the sector, how his father and grandfather sold their businesses to purchase their first corn meal mill and how they sold the dry meal, which is today the company MASECA, with which they completely revolutionized the tortilla industry in Mexico and worldwide. Then he went on to explain Roberto’s grand vision for business.

“A great example of this was how he took advantage of the development of food and the Mexican tortilla in the United States. I remember the difficulties entering the market in Los Angeles, where he searched for a strategy to convince clients to use MASECA’S corn meal; how he explained to them and showed them that his product was also made of corn, but that it had advantages for them, such as the fact that it was easier to prepare, it did not spoil as quickly, and less was wasted when making tortillas.”

Gruma’s first incursion into the United States was in the mid-1970s, when it purchased its first tortilla plant (Mission) in Canoga Park, California; in 1977 it opened its first MASECA mill in Texas.

“I can tell you that Roberto was a great man, businessman, worker and visionary. When I was a boy, I remember that on the weekends I would go with him and my grandfather to sell corn meal. He taught me the foundations of business and love for the company. He taught me that work and effort are the basis of success. I remember these things every day,” he added.

“I am grateful for the help and the guidance that inspired me to be who I am. I had the best teacher with his lessons and advice, and today I feel secure in facing the challenges I experience in Gruma’s (Azteca Milling and Mission Foods) day-to-day. It continues to be the company that nourishes the heart of Mexico and the world,” said Juan González Moreno, President and Chief Executive Officer of Gruma.

Related: Tortilla industry is unstoppable in the United States

The Tortilla Industry Association, created in 1989, is a non-profit organization headquartered in Arlington, Virginia, whose members include tortilla manufacturers, industry providers and distributors worldwide, and companies with interests in the sector, mainly in the United States.

In the United States, the tortilla is the food with the highest growth among consumers, and its annual sales exceed ethnic and specialized foods, including bagels, croissants, muffins and pita bread.

The world expansion of Gruma

Created in 1949, Gruma is the largest producer of corn meal, tortillas and wraps worldwide. With leading brands in the majority of its markets, Gruma operates mainly in the United States, Mexico, Central America, Europe, Asia and Oceania.

Its corporate offices are located in Monterrey, Mexico. It has approximately 24,000 employees and 80 plants strategically located all over the world. In 2016, the company’s sales were approximately US$ 3.6 billion dollars, of which 75% came from operations outside of Mexico.

During the first quarter of 2017 (1Q17), Gruma made capital investments of US$ 58 million dollars, which funds were used in several areas, including: in the United States, building a state-of-the-art tortilla plant in Dallas, which will be operational in the second quarter of the year, increasing capacity at its corn meal plant in Indiana, and expanding its tortilla plant in Florida; in Europe funds will go towards building a tortilla plant in Russia; and in Asia, towards expanding the capacity of its plant in Malaysia.