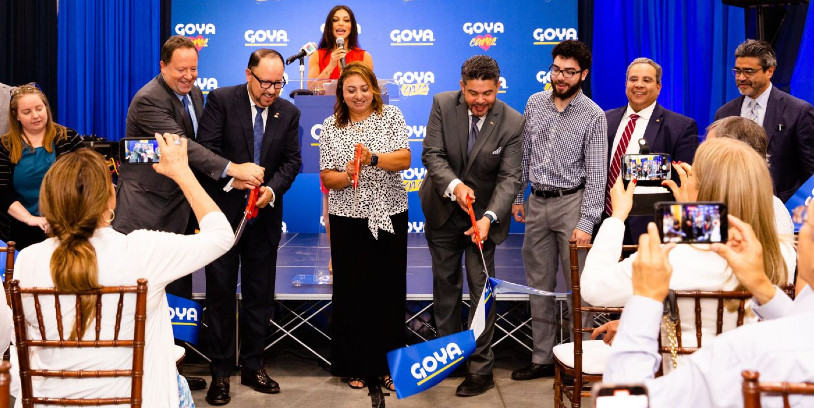 Goya Foods celebrated the expansion of its facility in Bolingbrook, Illinois, where it has been operating for over half a century.

Goya Chicago has become the company’s latest expansion project during a time of high inflation rates where supply chain concerns have impacted the way consumers acquire everyday goods and food, stated the company in a press release.

In addition to Goya’s expansion of 26 facilities throughout the United States, Caribbean, and Europe, this new project directly confronts the current global food crisis. It ensures that consumers have access to affordable, nutritious, and plant-based products.

In honor of the opening, Goya will donate 20,000 pounds of food to the Illinois Migrant Council and $20,000 to the Salt and Light Coalition as part of Goya Cares, a global initiative to eliminate child trafficking domestically and internationally.

“Through our Goya Gives initiative, we have donated millions of pounds of food to pantries and communities throughout the United States and around the World. Now, after a couple of years of lockdowns, accelerating costs, and inflation creating severe supply chain challenges around the globe, we are preparing for what is to come by expanding our facilities worldwide and procuring supplies and raw materials needed to reinforce our ongoing commitment to keep grocery stores stocked without interruption,” said Bob Unanue, President and CEO of Goya Foods.

The Bolingbrook facility, totaling nearly 300,000 square feet, will double the amount of food distribution throughout the Midwest, including an additional ten states and emerging markets.

The building is equipped with state-of-the-art technology and machinery to operate more efficiently and support Goya’s growth worldwide. The expansion also ensures the retention of existing local jobs and offers new positions.

Founded in 1936, Goya Foods, Inc. is the largest Hispanic-owned food company in the United States and has established itself as the leader in Latin American food and condiments. Goya manufactures, packages, and distributes over 2,500 high-quality food products from Spain, the Caribbean, Mexico, Central and South America.