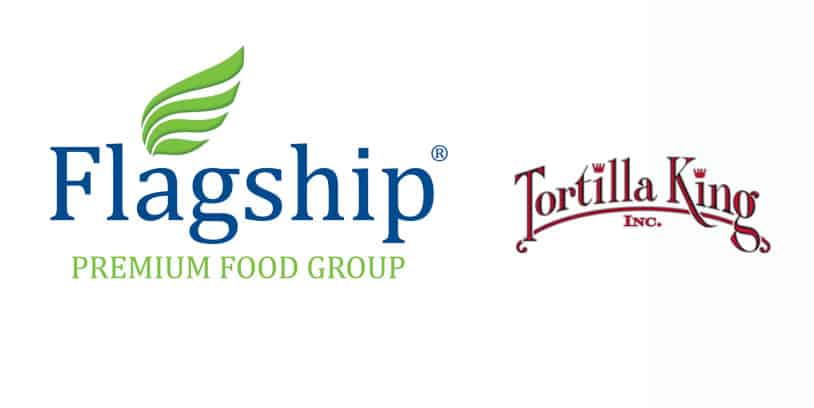 Tortilla King announced that Denver-based Flagship Food Group, 505 Southwestern and La Tortilla Factory owner, has agreed to invest in Tortilla King to support its future growth and expansion strategy. Flagship will become the majority owner in the company while current local management remains in place and Juan Guardiola remains a shareholder.

With the acquisition, the company said, Flagship solidifies its place as one of the leading and largest privately held food companies in the country, focusing on Hispanic brands emphasizing premium products. The transaction closed in mid-July, and the terms of the transaction were not available.

Based in Moundridge, Kansas, outside of Wichita, Tortilla King is a leading Midwest manufacturer and distributor of flour and corn tortillas, tortilla chips, and Mexican food products for various blue-chip customers and national retailers.

“I’ve known the team at Flagship for many years, and we’ve been a supplier and partner of theirs across several of their product portfolios. Coming together as one company made sense for them, for me, and our valued employees and customers,” said Juan Guardiola, co-founder of Tortilla King. Guardiola will remain in his role as President of Tortilla King.

Most of the Flagship’s brands are rapidly expanding, having experienced significant growth and expanded national distribution in recent years. 505 Southwestern, crafted with New Mexico green chiles and made in Albuquerque, is the country’s largest jarred green chile brand.

“We are building a world-class, scaled, diversified food company. The Hispanic foods category has been our principal focus for nearly a decade, and the addition of Tortilla King expands both our capabilities and geographic footprint,” said Rob Holland, founder of CREO Capital Partners and its managing partner. Holland helped lead the firm’s acquisition of 505 Southwestern over a decade ago and has driven the brand’s growth by over 15-fold during CREO’s ownership.

Tortilla King sells premium tortillas and tortilla chips under Mama Lupe’s brand. The company operates manufacturing and distribution facilities across the Midwest. In addition, it serves as a manufacturing partner to other food companies and food retailers across the county. An innovator in the category, the company has developed low carb, net-zero carb, and gluten-free tortilla offerings for its customers focused on health and wellness.

“Simply put, we are here to support growth,” said Forrest Kragten, a principal at CREO. “As part of the transaction, we approved and supported a significant expansion of the Tortilla King operation in Kansas. We’re excited to bring more volume and production to this area and this outstanding team.”

Earlier this year, Flagship announced the acquisition of La Tortilla Factory, a Santa Rosa, California-based maker of premium tortillas and Hispanic food products. Flagship says that the two companies complement Flagship as one of the top-ten branded tortilla companies in the country. Operations, brands, and management of each company will remain independent and fully intact.