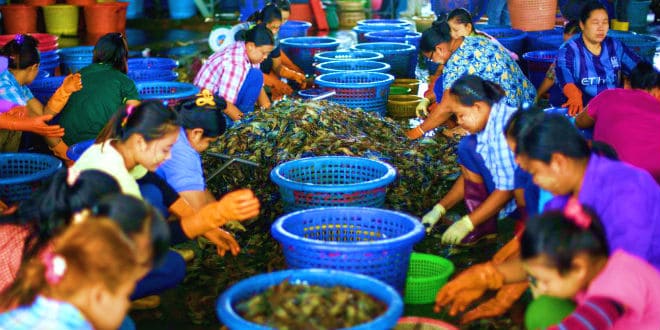 The fishing sector, which employs over 58 million workers globally, is plagued by human rights and labor abuses. Trafficking, forced labor, and physical abuse of workers at sea and in processing plants are chronic problems throughout the seafood supply chain. News reports reveal stories of fishermen held captive at sea for years at a time or shackled by the neck, and migrant workers spending sixteen-hour days peeling shrimp in ice water, without access to bathroom facilities.

As the third largest importer of seafood, U.S. consumers, companies, and policymakers have an essential role to play in stemming these abuses. According to the National Oceanic and Atmospheric Administration, Americans consume 4.5 billion pounds of fish annually. Multiple assessments of seafood supply chains of major brands and retailers sourcing from the Thai seafood sector underscore the risks. A recent study by the non-profit organization Verité examined Nestlé‘s operations in Thailand, where Purina brands, including Fancy Feast, are produced. The study found evidence of human trafficking, forced labor and child labor in Nestlé’s supply chain and suggests that other brands’ supply chains are equally at risk.

This means that American consumers — and our pets — likely are consuming fish products that were harvested and prepared by people enduring some of the worst working conditions on earth. Consumers are not taking this news lightly. In the last year, Mars, Nestlé, and Procter & Gamble have faced class-action lawsuits for failing to disclose forced labor in their pet food supply chains.

The Solution to the Seafood Problem

Eliminating forced labor in seafood is a monumental task that will require more from public and private actors. First, governments need to do more, both in consuming countries in North America and Europe, and in sourcing countries like Thailand. In the United States, Secretary of State John Kerry has launched an important new initiative, the Our Ocean Summit, aimed at protecting ocean resources. This initiative dovetails with new standards proposed by the National Oceanic and Atmospheric Administration to include data reporting to ensure seafood traceability from harvest to import.

Last month, Congress closed a loophole in the Tariff Act of 1930 that had allowed for the importation of seafood and other goods produced through forced labor, as long as U.S. production could not meet domestic demand. Now the government needs to expand its proposed data reporting to include forced labor, an essential first step in effective enforcement.

Second, companies like Mars, Nestlé, and Walmart, also need to do more to improve their sourcing practices. This will require greater collective action by industry leaders including greater financial investments to develop better, more sustainable sourcing models that do not rely on a system of labor abuse.

By sharing responsibility for regulation and sustainable sourcing, industry and government can work together to protect workers, consumers, and global resources.