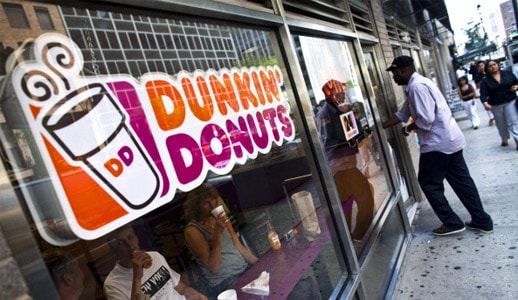 US-based fast food Dunkin’ Donuts signed an agreement with the Sizzling Platter restaurant operator unit in Mexico to open more than 100 units in the country, where its competitor Krispy Creme already operates.

The franchise agreement “is to develop more than 100 Dunkin’ Donuts restaurants in the Federal District and in the states of Hidalgo, Mexico, Morelos, Jalisco and Querétaro, over the coming years,” said the company.

Dunkin’ Donuts has partnered to enter Mexico with the Sizzling Platter local unit, which currently operates Little Caesars’ pizza chain restaurants in Mexico City and the state of Guadalajara.

The company did not immediately informed the agreement investment amount or its first store opening date.

Some Dunkin’ Donuts restaurants operated in Mexico years ago.

“There is a significant demand in Mexico of what Dunkin’ Donuts offers, high quality food and drinks at a great price. We are delighted that Mexico will soon wake up with Dunkin’ Donuts,” said Paul Twohig, president of the company in the United States and Canada.

According to Euromonitor International firm, the growing consumption of gourmet coffee such as latte or cappuccino has helped increase significantly Mexico’s consumption per capita. In 2015 Mexican consumers are expected to take approximately two kilograms of coffee per person due to new cafes and bars that open every day.

The Dunkin’ Donuts restaurants in Mexico will have a wide range of hot drinks, espresso, cappuccino, lattes, teas, Coolatta iced drinks, bagels, muffins, croissants, donuts and sandwiches, all served quickly in nice stores at good locations at and affordable price. The brand will also offer regional menu items to cater to local tastes.