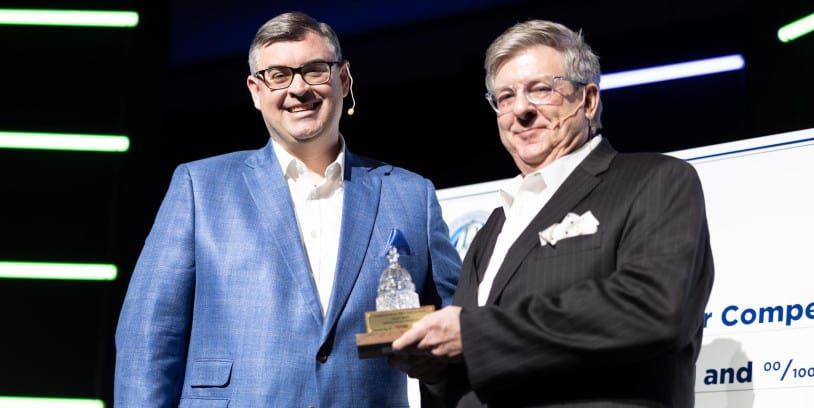 Smith received the award on March 21st during AWG’s Excellence Awards in conjunction with its Innovation Showcase and Annual Meeting at the Overland Park Convention Center in Overland Park, Kansas.

“Over the years, David has always been one of the first to host an elected official at an AWG facility, and he’s always willing to come to Washington to meet with policymakers on issues impacting independent community grocers. For many years, he has been a leader in helping to advance critical public policy issues that impact independent supermarkets,” said Greg Ferrara, NGA president and CEO.

Smith regularly appears before lawmakers in Washington, D.C., to testify about issues affecting independent grocery operators, most recently arguing in support of enforcement of the Robinson-Patman Act to level the playing field with large national chains, said the NGA in a press release.

In July 2021, Smith testified before the Senate Judiciary Committee, explaining to senators how power buyers use their dominance to take greater control of the market, demanding special treatment from suppliers without economic justification. Smith described the toll this behavior takes on the broader food supply chain, where suppliers, agriculture producers, and consumers alike are all being squeezed by these retail giants.

“Explaining antitrust issues isn’t something that easily rolls off the tongue for most, which is why it was so important to have people like David participate in countless meetings with elected officials, federal regulators, and administration officials, helping them understand how inequities in the marketplace, driven by the explosive growth of power buyers, directly impacts communities across America,” Ferrara said. “NGA and our industry have achieved enormous wins because of the passion and commitment of people like David Smith.”

Smith began his extensive career in the food industry as an independent store owner, then rose through the ranks at wholesaler Fleming Cos. before joining AWG in 2003. As AWG’s senior vice president and general manager, he opened the company’s Gulf Coast Division in Louisiana in 2013. Smith became president and CEO in December 2015, succeeding Jerry Garland.

The award’s namesake, Clarence Adamy, was a past president of the National Association of Food Chains and was very active in public and government affairs, having served as patronage chief and personnel director of the Republican National Committee during the Eisenhower administration.