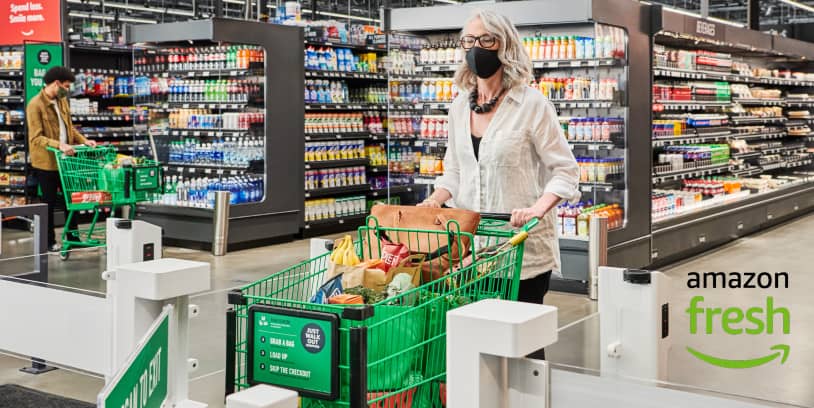 In September 2020, Amazon launched its first large Amazon Fresh store in Woodland Hills, California. One year later, Amazon Fresh now has 18 stores in six states and Washington, D.C., and by the end of 2021, it will have created more than 6,000 jobs.

In a press release, the e-commerce giant said that, in Southern California, Amazon Fresh stores will have offered more than 3,000 jobs to the local community by the end of the year.

Amazon is also seeking workers for three new Amazon Fresh stores opening in Cerritos, La Habra, and Moorpark, the first to use Just Walk Out technology in California.

“Our Amazon Fresh store team is strong and growing,” said Stephenie Landry, vice president of Amazon Grocery. “I enjoyed being able to meet the employees and see how they support each other and assist customers as they visit our stores. Thanks to this incredible team, we can provide customers, in their own communities, with a new and innovative shopping experience that they love.”

The company said jobs at the new California stores offer starting wages of at least $15 per hour, comprehensive benefits, and career growth opportunities. Roles at the La Habra and Moorpark locations also include a hiring bonus of up to $1,000.

The new Amazon Fresh employees will join the more than 153,000 full- and part-time Amazon employees already working in California, the company said.

Since 2010, Amazon has invested more than $81 billion in California, which includes infrastructure and compensation for its more than 153,000 employees in the state, the company reported. These investments have also helped create more than 259,000 indirect jobs in addition to Amazon’s direct hires, ranging from construction and logistics jobs to professional services.

Starting wages will also be at least $15 per hour with comprehensive benefits, and new employees will have a hiring bonus of up to $3,000. Amazon has more than 36,000 full- and part-time employees working in Illinois.

Amazon said it had invested more than $14 billion across the state of Illinois, which includes infrastructure and compensation for its more than 36,000 employees. These investments have also helped create more than 54,000 indirect jobs.

Interested candidates can visit www.amazonstores.jobs for more information and apply.

Just Walk Out uses a combination of sophisticated technologies to determine “who has taken what” from the store and eliminate checkout lines.

In Just Walk Out-enabled stores, shoppers enter the Amazon Fresh store using a credit card. They do not need to download an app or create an Amazon account.

Just Walk Out technology detects the products shoppers check out or return to the shelves and tracks them in a virtual cart.

When they’re done shopping, customers can walk out and have their credit cards charged for the items in their virtual cart. If shoppers need a receipt, they can register their email address at an in-store kiosk, and the store will send the receipt to them. If in the future, customers use the same credit card to enter that or any other store enabled for Just Walk Out technology, the receipt will be automatically emailed to them.