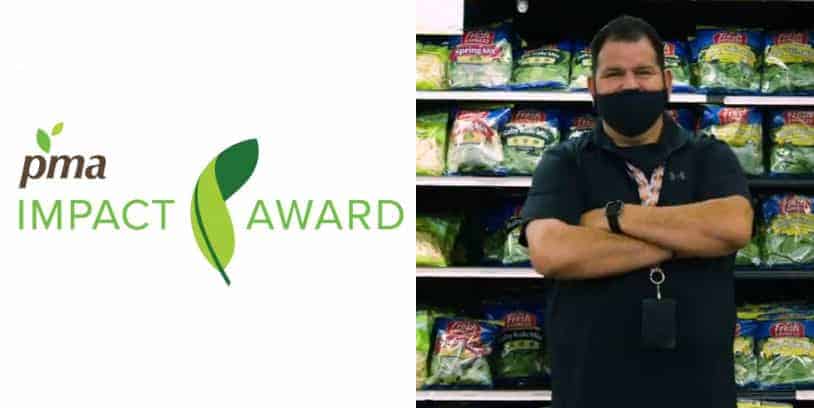 For his work at 99 Cents Only Stores, helping to bring fresh produce to the Los Angeles community, Al Romero became the first individual winner of the PMA Impact Award.

According to the Produce Marketing Association, Romero is a true industry veteran. He began his career pushing grocery carts and stocking shelves in 1978 and has advanced to become not only a senior merchandising manager at 99 Cents Only Stores but also their first-ever Fresh Manager.

“We know that two of the greatest barriers for fruit and vegetable consumption is preference and accessibility,” said Lauren M. Scott, chief strategy and membership officer at PMA. “Al Romero has tackled both of these barriers by helping to introduce produce to his stores. He is working with buyers to provide a variety of produce at a price point that serves his customers, and his outstanding merchandising is making it a desirable and sought-after option week after week.”

The 99 Cents Only Stores offer over 250 SKUs of fresh produce. In most cases, they’re providing produce to consumers within 72 hours from harvest, providing incredible value to traditionally underserved communities. In many of their stores, almost 20 percent of their produce is organic.

“Al was our first Fresh Manager in the field,” said Caitlyn Tierney, senior director of fresh at 99 Cents Only Stores. “He and I grew produce to what it is today. We had a supplier call us and tell us he needed to sell a shipment of strawberries. We bought the load, sent it to our stores and within an hour the whole load was sold out. We said, ‘clearly this is something our community is in dire need of.’”

Romero embodies the PMA Impact Award as a leader having a transformative effect on the produce and floral community, but he would also share that his work has had an undeniable impact on his community as well, said PMA.

“What we created in the produce department is a healthier environment for our customers, our community, and our associates,” said Romero. “It was a team effort with our buyers. They brought in a great variety, and my job was introducing it as an appealing option and getting it out there to the community. When I wake up every day, I’m excited to come to work. I think about ‘What family are we going to make happy? What family are we going to help put food on the table?’”