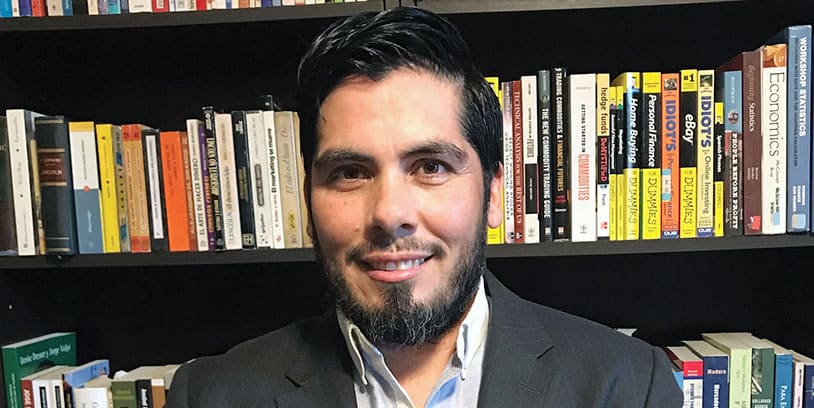 The objective of Iván A. Ahumada as the new national sales director of Minsa USA is to launch an aggressive expansion plan so that the renowned flour brand can be found on the shelves of all Hispanic stores and the large supermarket chains in the country.

Minsa is a successful Mexican company that has been producing Nixtamalized corn flour for 60 years in a competitive market that continues to grow in the U.S. due to the increased demand for tortillas, toasts, and other products made with this type of flour. Since 2007, Ahumada worked in Minsa, holding various positions.

In an interview with Abasto Magazine, Ahumada discussed his successful career at Minsa and how a product like corn flour, which has been a primary food for the Mexican and Central American population since pre-Columbian times, is an expanding industry that generates billions of dollars in sales.

A native of Colima, Mexico, Ahumada lived his youth in Ameca, Jalisco. Then in Guadalajara, he continued his professional studies at the University of Guadalajara, where he graduated as a Bachelor of Economics and later did a Diploma in Tax Law at ITAM.

For some years, he owned two convenience stores, and for three years he worked in Mexico City in the public sector, as an Advisor to a Senator from the Republic.

Abasto Magazine: How did your career develop in the Minsa Group?

Iván Ahumada: “In 2007, I was offered a job at Almacenadora Mercader (ALMER), from the same Minsa business group. There I worked for a year as a manager supervising warehouses in the Jalisco Valley region, which was dedicated to the collection and marketing of corn for Minsa and the industrialists of the dough and tortilla. In 2008, I was offered a new opportunity for a new position that opened in the United States at Minsa Corporation, and that consisted of the National Sales Sales Manager, a position that I held at this company until January 2018.

AM: What has been your formula for success as a seller and climbing positions in Minsa?

IA: “I like what I do, I like the company I work for, and I like the food sector. When you do and enjoy what you like, and you are in the right place, where they treat you well and give you the tools, the confidence and the resources to do and perform your job well, I believe that things happen alone, synergy occurs between the seller and the company. Minsa is a company that is very clear about its objectives and its role in the industry. Therefore, during all this time, I have been able to bring loyalty, hard work, and added value to the company. ”

AM: What have been the biggest challenges you have had to face, and what situations have marked your life?

IA: “Life itself is a challenge in itself. We have the roles of children, siblings, parents, students, employees, boyfriends, husbands, etc. The challenge is to be able to keep these roles balanced in daily life and perform to the maximum in each one of them without affecting the others.

In my working life, the most crucial challenge is to be able to end the day, knowing that I have done my job well and effectively. Without a doubt, what has most marked my Life was the birth of my daughters. There is nothing more enjoyable in this world than seeing your daughters for the first time; no one learns to live until they become a father.”

Related Article: Minsa Boost its Presence in the U.S. with a New Image

AM: Why is the U.S. market so important to Minsa?

This market is very important for Minsa because Latin Americans, mainly those of us from the Mesoamerica region, we are the men of corn, it is a basic food in the diet of Mexicans and Central Americans. History tells us that corn was developed and domesticated in central Mexico more than 9,000 years ago by the inhabitants of those regions. Corn was a gift from Mexico to the world, with many uses and present in many foods and food ingredients today.

AM: The coronavirus pandemic has forced all sectors to transform and adapt to a new normal. How has this process been at Minsa in the U.S.?

IA: “We have noticed that the pandemic mainly affected products that were sold to foodservice customers such as restaurants, casinos, taquerias, etc. because they were forced to close to promote social distancing. On the other hand, the products that were sold in supermarkets are those that increased sales. Under this new scenario, adjustments had to be made to our production and sales plans. ”

AM: What future awaits the Hispanic food industry in the U.S.?

IA: “Under this uncertain scenario, we bet that the food industry is considered essential and that we should have consistent sales. In general, the last six months of the year have been the best in our industry, due to the festivities of the Latino community in the U.S., starting with the national holidays and the end of the year with Christmas and New Year celebrations. Still, and with all my optimism, we are not finished with this problem of the Covid-19, and we don’t know the financial and economic consequences that all this may have in the future.

I remain hopeful that the impact will be minimal, and we will get out of this soon, and our economy will recover soon. ”

AM: How will Minsa continue to grow in the U.S. market?

IA: “Offering quality, functional products that meet specific customer needs. Offering products with consistency in smell, taste, color, and performance. Promoting them in supermarket chains and with distributors. By creating a business in which we can offer all the benefits, including a fair price.”

The relaunch of Minsa USA

In January 2018, Minsa sold the mills in the U.S to Bunge and gave it for two years of exclusive use of the Minsa brand to market it within the country. Minsa continued to operate normally in Mexico, but during those two years (from January 2018 to January 2020), the company was unable to sell its products within the United States. At the end of this period, in January 2020, Bunge stopped marketing the Minsa brand and removed it from its product portfolio.

Since February 1st, 2020, Minsa resumed the full right of the brand and began the process of relaunching the brand in the U.S. The new company is called “Minsa USA, Inc.” and it has substantial and aggressive expansion plans, offering quality products and with the tradition of more than 60 years that support them.