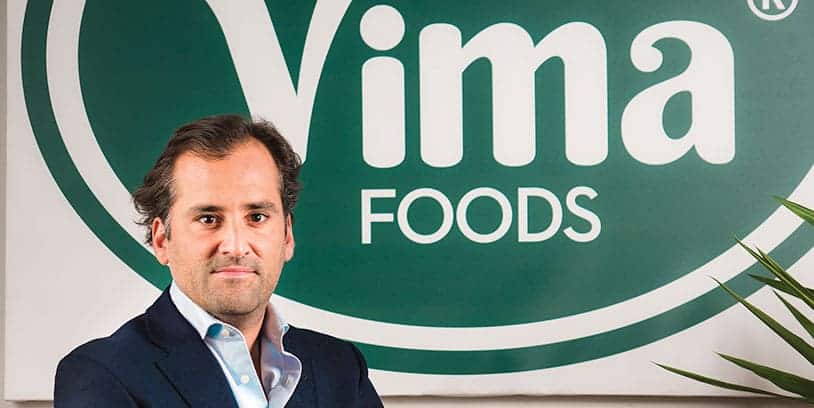 For Víctor Moro, executive vice president of the Spanish food products company Vima FOODS, 2021 comes loaded with great plans for the company. It marks the beginning of his expansion campaign on the East Coast of the United States, following the success path that his father began almost three decades ago when he founded the business in Galicia.

Vima FOODS is dedicated to producing, purchasing, and distributing high-quality food, especially frozen seafood, in Europe, China, the Caribbean, and Mexico. In 2019, the company established offices in New York and Miami. It implemented a strategic plan to market its food products in the growing Hispanic independent supermarket industry and large grocery store chains.

In an interview with Abasto magazine, Víctor Moro and the team of Vima FOODS executives in charge of the operation in the United States made up of Edelmiro Iglesias, CEO of Vima Foods, Manuel Núñez, deputy general manager of Grupo Vima, and José Geraldo, director Vima FOODS USA executive, offered their vision of the Spanish company, its products, its expansion plans in the United States and the challenges that the company has faced due to the coronavirus pandemic.

The family business was founded in 1994 and has always been closely linked to the fishing sector, Moro highlights. He said that his father, Víctor Moro Suárez, a banker, realized during his travels in the Caribbean that hotels lacked Spanish food products and saw the opportunity to create a business to supply this demand.

“The company grew, because we evolved from fish to the world of food in general and today we work in almost all product families, but we are critical in the sector of frozen products with fish and seafood, vegetables, fruits, precooked and now we are developing a line of smoothies (shakes),” said Moro.

Vima FOODS has its main offices in Spain and Panama and has its own distribution centers in seven countries. They are the main food importers in the Dominican Republic. They also have a large presence in other countries in the Caribbean area and Mexico, in the Cancun and Los Cabos area, where they are the main food distributors in the hotel sector and have been spread to China.

But now, his most important strategic project is the United States, Moro said. The idea arose four years ago, and they began to work to implement it, first solving the legal part and doing the pertinent studies to understand the market and its consumers. Thanks to the company’s experience in the commercialization of food products in international markets, they have advanced without major problems in the initial process of entering the US market.

“I believe that being present in the Caribbean and Latin America area, obviously our natural step was growth towards the United States, starting with the penetration of the Hispanic market,” said the vice president of Vima FOODS.

For his part, the company’s CEO highlighted the importance of the work being carried out by the management team in the US to advance with the expansion plan.

“What every company has to do when it wants to enter a market is to listen to the consumer and the client, but also to the people who really know how things are done in that target market and we are fortunate to have Manuel Núñez and José Geraldo, who know the consumer well, with an extensive trajectory in this US market, and of course we have to take note of what works and what mistakes to avoid,” said Iglesias.

What Vima FOODS did not anticipate was the coronavirus pandemic’s magnitude, but they managed to react quickly to establish security protocols for both their employees and their products.

Related Article: What’s Ahead for Grocery Retail in 2021 and Beyond?

“We have invested a lot of time and money to comply with all the standards and protocols that the new situation requires. We have been one of the first food companies to receive COVID certifications, ”said Moro.

The young businessman acknowledged that the part of the business that sells products to the hotel industry was greatly affected when tourism fell almost to zero due to the pandemic. However, that coup motivated them to create new options to market their grocery lines.

“Here, the most important thing we have to get out of this year is diversification. I mean both channels and countries, as well as products. We cannot all be focused on hotels or supermarkets. We have to attend to as many channels as possible so that next time if something like this hits us, it will not impact us so much ”, highlighted Moro, who expressed confidence that Vima FOODS will come out strengthened from the crisis caused by the pandemic.

In 2021 the company hopes to advance in its expansion process in the US and go from having a regional presence in independent supermarkets, to taking its products to regional and national chain stores.

According to Moro, this new year they hope to penetrate the market of Texas and California, which have a large Hispanic population. Likewise, with the alliance they have with El Corte Inglés, they plan to position the renowned brand of Spanish products in the United States.

For his part, José Geraldo, a veteran of the US food industry, expressed his confidence that Vima FOODS products will begin to be found in stores along the East Coast, Texas, and California, because “although our company has a lot of recognition in the Hispanic area, our products are really aimed at the market in general because they are of high quality.”

Aware that Spanish food products are not yet properly represented on supermarkets’ shelves in this country, they trust that the El Corte Inglés brand will fill this gap. It is a leading brand recognized worldwide for the quality and variety of its products.

As a final point, Manuel Núñez highlighted that Vima FOODS had been characterized by its inception by its commitment to sustainability in the fishing industry and protecting the environment.

“For us as a company, this is not an issue to look good, we really have that vision incorporated into our DNA, and therefore, we do want to transfer that vision to the consumer,” said the deputy general manager of Grupo Vima.