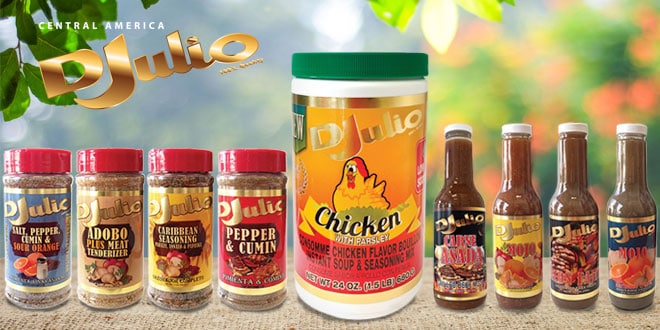 In 2012, D’Julio condiments mission began to bring the 10 million Central Americans who live in the United States the true flavor of their typical foods to keep alive the nostalgia for the traditional flavors of their favorite dishes.

The tradition of the condiments D’Julio goes back 49 years, when in San Pedro Sula, Honduras, Mr. Julio Sabillón and his wife, Mrs. Carmen, created their small business, making a combination of pepper and cumin and then adding other products that became indispensable condiments for Honduran meals, such as Chicken Consomme with Parsley, Salt Pepper and Sour Orange, Adobo with Softener, Caribbean Sazón Completo, Pepper Salt and Sour Orange with Spicy.

Due to the recognition they gained in San Pedro Sula, Don Julio decided to expand his business with an offer of 180 lines of varied products, to different regions of Honduras taking their condiments to wineries, supermarkets, hotels and restaurants.

In 2012-2013, he established the company DJ SAB DISTRIBUTION INC. In Miami, from where they began to sell their condiments to a network of small Latino distributors who understood the importance of D’Julio.

For Julio Sabillón Jr., the experience he has had working in the US market “has been a learning school since the system is completely different to the one used in Central America”.

The challenge of the entrepreneur has been to find the best way to reach Central Americans living in the US and that their innovative products are also acquired by demanding American and Mexican consumers.

Their secret weapon is the quality and freshness of the best grains with which they make their condiments, adding a good personalized service to satisfy their customers. “We always have in mind to give our customers quality, taste and health for their meals,” says Sabillón son.

Currently the condiments company D’Julio has a network of distributors that take their products to Hispanic stores in major cities such as Los Angeles, Houston, Dallas, Baton Rouge, as well as in the states of North Carolina, South Carolina, Virginia, Washington, Oklahoma, Tennessee, Louisiana, Mississippi and Alabama.

Their next goal is to reach the large supermarket chains to make it easier for their Hispanic customers to purchase the full range of D’Julio products in any state or city where they are located.

The next step is Europe, where they are scheduled to open their offices by 2019 to take their products to the Spanish colony in Spain, France and Germany.