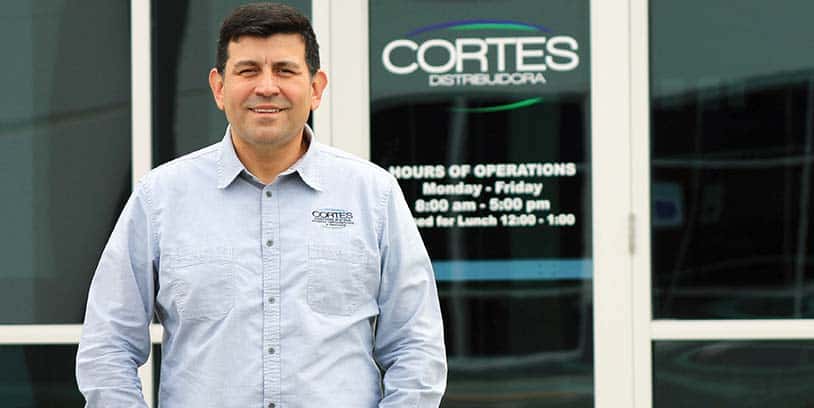 John Cortés’ entrepreneurial mind, his business sense, and his firm intention to stand out for his excellent customer service have been the pillars of success for this Colombian-born businessman. He has positioned his company, Distribuidora Cortés, as one of the largest and most recognized Hispanic food distributors in Tennessee, Alabama, Kentucky, Ohio, Missouri, and part of Indiana in less than a decade.

This family business, based in Nashville, Tennessee, has grown exponentially due to the need for more Hispanic food distributors in the region. Previously, there was only one company dedicated to this sector.

“We came to compete at that time, and it was a relief for the market because the prices they were paying for the products were excessively high, and in a way, our arrival helped the market to lower the prices of the products,” said Cortés.

Less than ten years ago, the entrepreneur went into the food distribution business. He started in a small warehouse of about 5,000 square feet and with a truck delivering single-brand products. But with the support of his wife Carolina, who, among other things, took care of sales in the local area, after two years, they moved to a 10,000-square-foot warehouse because they could not keep up with the demand.

Since then, they have operated in that facility and have two other satellite locations while they finish building their modern 40,000 sq. ft. distribution center. They expect to open the new warehouse in September.

A crucial part of Distribuidora Cortés’ success was creating its brand of La Finca products, with Jasmin rice, Central American style bread, cheeses, butcher products, and snacks being its flagship foods. They already have a portfolio of more than 130 products together with their other brand of beverages and desserts, Refreshing Fruit.

They are also confident that their product portfolio will continue to expand with the upcoming inauguration of the new distribution center, which will have a capacity of 5,000 pallets and a special refrigeration area. Cortés said that they would be using state-of-the-art technology for the development of all warehouse operations.

Given the new growth stage that lies ahead for Distribuidora Cortés, its founder is aware that one of the challenges will be recruiting and retaining personnel. To this end, they are working on a competitive salary plan and other benefits that will make it truly attractive to belong to the company’s team.

For his part, Miguel De La Torre, director of Hispanic Trade, a consulting firm that supports the administrative operations and strategies of Distribuidora Cortés, pointed out that the company’s efficiency has allowed it to be profitable by year-end. “They have been able to manage the company in a very healthy way because they have impeccable collections. The company has such an effective sales department that people love them and want to buy from them, customers have become very loyal to Distribuidora Cortés,” emphasized De La Torre.