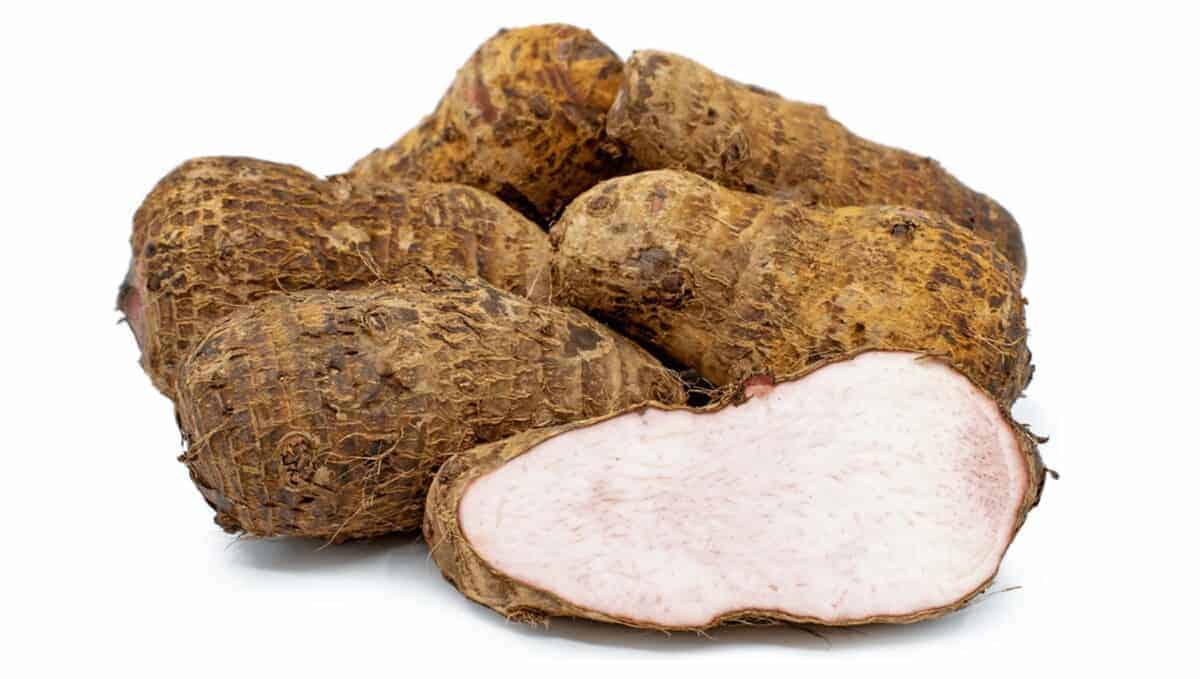 Anyone who has ever wandered into the produce aisle of a Caribbean specialty market will have noticed the malanga root, a staple of the Caribbean, and South America.

Malanga is very similar to taro and eddo and it’s often confused with them.

This guide covers everything you need to know about Malanga including, risks, benefits, nutrition, and more.

Malanga vs Taro vs Eddo: Not The Same!

The Malanga and Taro plants belong to the Araceae family but the first one is part of the genus Xanthosoma while the latter belongs to the genus Colocasia.

Both plant species are extremely difficult to distinguish. Although they all come from the same family they belong to different genus groups and are often confused with each other.

These similar vegetables are often cultivated side by side and harvested together which contributes to the confusion.

Some forms of malanga and taro are so similar that they get dozens of overlapping names. Most of these names are local names, which are used to describe the different colors and are associated with the names common in the region, but they can also include vegetables of other species.

Malanga is a good source of vitamins C, B, and E. Rich in minerals, such as potassium, phosphorus, manganese, vitamin C, riboflavin, thiamine, and iron. All which are essential for optimal body functioning.

It contains fiber, ideal for improving intestinal transit. It has low sodium, specifically, a serving for an adult-only provides 20 milligrams of sodium, which is just 1% of the recommended daily amount of sodium.

Where Does Malanga Grow?

This particular species is indigenous to the tropical areas of South America and the Caribbean where it was first domesticated as a crop.

It’s also grown in the United States, Canada, Australia, New Zealand, Middle East, South Africa, and South Korea, but is most commonly grown in North America and Europe, as well as in Africa.

You can find this vegetable in most specialty grocery stores in most countries.

The Latin American market offers a wide range of Malanga products, such as plants, flowers, herbs, seeds, and fertilizers.

Related Article: What Is Yuca?

Nowadays, Malanga is cultivated in most parts of the world in the same way as the Taro root.

You can find Malanga in Cuba and Puerto Rico in dishes such as sancocho, mondongo, pasteles, and alcapurrias. In Trinidad, Tobago, Guyana, and Jamaica they use the Malanga leaves to make Callaloo.

In fact, some experts say there are 50 to 60 different species of Xanthosoma (Malangas genus), and what I mean by that is that I was surprised to see so many different names for the same plant in different parts of the world.

For insta, the name Cocoyam (West Africa Taro) may refer to a species similar to, if not identical to, Malanga, but the plant goes under several other names, including Tannie, Tanni, Kojams and Yautia.

This adds to the confusion we discussed earlier in this article.

How to Cook Malanga

How to prepare root and tubers is up to you!

You can try them boiled, mashed, or deep-fried into chips. It makes a great thickener in soups and broths.

Malanga should only be eaten cooked and consumed within a week. Fresh Malanga root can be stored at room temperature for a few weeks, or kept in the refrigerator and stored in a cool, dry place for at least two weeks.

Enjoy this malanga recipe with family and friends.

If you happen to be at a Hispanic market and are looking for new food to add to your repertoire, consider trying this nutritious tuber.

Overall, malanga provides many beneficial nutrients, particularly when people eat it along with other nutritious foods as part of an overall healthy diet.