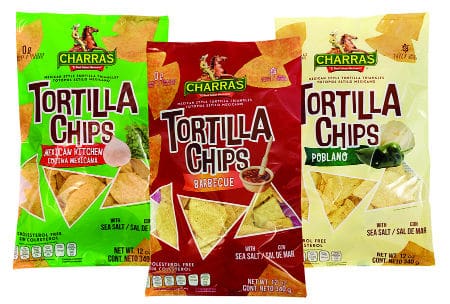 Charras invites you to try the new and delicious flavors of Tortilla Chips: Poblano, Sesame, Mexican kitchen and Tinga. Follow the traditional line as well in Natural flavor and Chile lemon.

Their story began in 1982 with the company Mercadotecnia Nieto. In the year 2011 the company consolidated production at their new plant in San Jose Iturbide, Guanajuato.

The Fiesta Charra group in its manufacturing division, currently does the production of its own brands and works at a third-party capacity.

The Charras distribution group operates with more than 350 routes of self-service, wholesale medium wholesale and detail.

Some of its trading partners in Mexico and United States:
In the United States, Palacios & Son’ is serving effectively centralized, self-service chains and independent distributors channels.