Home » News » How Does the Coca-Cola Company Plan to Support its Hispanic Partners? 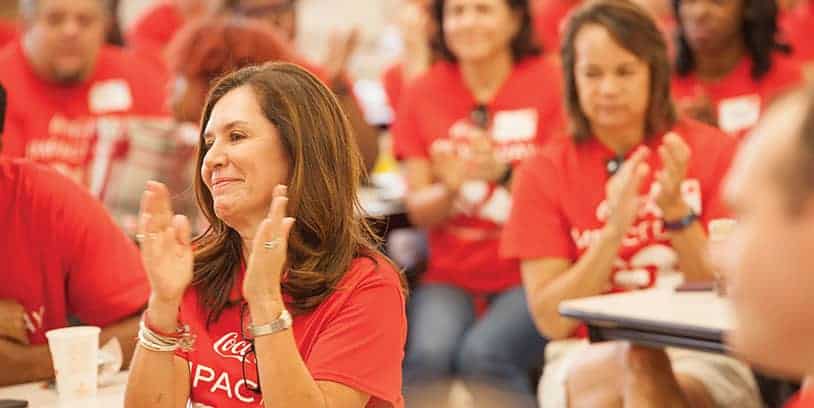 Alba Castillo Baylin, Coca-Cola’s Vice President for Community Management and Public Affairs, North America Operating Unit, is on a marathon mission to connect with Hispanic community partners and business organizations across the country. Her goal is to reaffirm Coca-Cola’s commitment to support them and strengthen ties with this growing sector of the population.

In an exclusive interview with Abasto Magazine, Castillo Baylin offered details on how the Coca-Cola Company is working to further cultivate this relationship with its Hispanic partners, following the integration of the Office of Latino Affairs into her department. The change was part of the overall restructuring process that the soft drink giant began last year.

The company decided to consolidate its global operations to create a more interconnected organization in order to grow stronger as a business in the wake of the global crisis caused by COVID-19.

As part of the restructuring plan, the Coca-Cola Company decided to reduce its number of business units to nine. In this process, they integrated the Office of Latino Affairs into a department with a team of more than 80 people that will allow for increased community and business support.

The Office of Latino Affairs had the mission of establishing relationships with influential Hispanic organizations, businesses, and community partners and operated independently for more than 20 years. It was staffed by three people and led by Peter Villegas.

“We believe that the success of the Office of Latino Affairs should serve as a model for the company to establish similar units within Coca-Cola to address the needs of the country’s diverse communities,” reads an excerpt from the letter the National Supermarket Association sent to Coca-Cola’s president.

But Castillo Baylin, a Colombian-born executive who has worked at the Coca-Cola Company for more than 20 years in key positions related to Hispanic marketing and business relations, was already working on a plan to address the Hispanic organizations’ concerns.

“When they made the internal announcement about Coca-Cola’s restructuring, Peter Villegas and I got to work. A key part was to make sure we had the resources we needed to continue the great work they had done in the Office of Latino Affairs. The first thing we did was to look in-house, that we had Latinos who understood the Hispanic market and represented it,” said Castillo Baylin.

The second step Castillo Baylin took was to ensure integration with the marketing team for the decision-making process. Finally, she took an in-depth look at how the U.S. Hispanic community has transformed due to its rapid population growth to respond to its needs adequately.

“The goal of this change was integration,” the Coca-Cola executive emphasized. “We have to look at the Latino market from the standpoint of how from the company, the bottlers, and our marketing department, we are representing them. How we are making sure that Latinos have access to be part of the business as suppliers; how they can participate in the area we call ‘Supplier Diversity,’ which is the people we buy services from.”

Therefore, Castillo Baylin added, “the analysis of integration had to be from: where we are right now, to how we are investing, and the investment goes beyond the community. How, at the Coca-Cola Company, are we preparing to support our business partners?”

Once the Community Management and Public Affairs department conducted its integration analysis, the study was presented to the Hispanic Advisory Council. This external advisory group helps guide Coca-Cola’s decisions about its relationship with the Latino community.

As part of the restructuring process, Coca-Cola is also looking for the company’s workforce to reflect the diverse population that makes up the U.S.

Although the coronavirus pandemic has disrupted the way they work and communicate, Castillo Baylin and her team understand the importance of reaching out to Hispanic organizations, marketers, and other partners around the nation. They want to listen to them, answer questions, and present their plan of action to support and strengthen ties with all of these groups.

In the spirit of listening and dialogue, Castillo Baylin held a virtual conference with the leaders of several Hispanic organizations in the Northeast, including the National Supermarket Association, which represents more than 400 independent Hispanic supermarkets on the East Coast.

“We had a very cordial and positive dialogue with Ms. Castillo. She explained the reasons for eliminating the Office of Latino Affairs and committed that they will continue to support our association of independent Hispanic supermarkets with more resources,” said Nelson Eusebio, director of government relations for the National Supermarket Association (NSA).

Coca-Cola’s Vice President for Community Management and Public Affairs reiterated that commitment in the company’s new phase. “It’s a big challenge, but we have the infrastructure, we have the people, we have the experience, and most of all, we have the willingness to listen and adjust whatever it takes to do the right thing.”

From one office to a whole department

A Colombian Woman’s Leadership at the Coca-Cola Company

Born in Bucaramanga, Colombia, Alba holds a Bachelor of Science degree from Florida International University and a Master of Business Administration degree from the Robinson College of Business at Georgia State University.

For six years, she was assigned to the Company’s Latin America Group, first as Director of Revenue Growth Management and later as Group Director, Shopper Marketing.

She is a strong advocate for community service and serves on the Georgia State University Foundation boards, the Woodruff Art Center’s Alliance Theatre, and Junior Achievement of Georgia. She is a graduate of the Leadership Atlanta class of 2018.