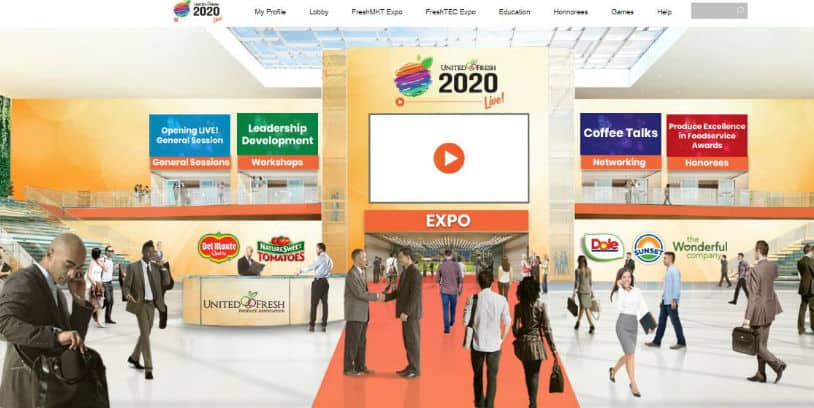 For the free event that was organized in two and a half months as a response to the social distancing measures due to the coronavirus pandemic, more than 12,500 users registered on the platform and more than 7,500 on average participated in the virtual show daily, according to figures provided by United Fresh’s management.

The general consensus of the show’s participants was one of admiration and praise, after a week of live online conferences through the Zoom platform, visits to the virtual booths of more than 200 exhibitors, educational workshops and Coffee Talks sessions where industry professionals met virtually for informal discussions on critical issues.

“The virtual fair has been a learning experience for marketing and sales teams. I am pleased that United Fresh has found a solution during the pandemic to continue the event,” said Diana McClean, senior marketing director at Ocean Mist.

“I think we can all agree on the importance of staying connected within our industry and the virtual show was able to bring us all together at a time when we have no choice but to be apart,” said Pepe Bonfiglio, vice president of sales for Sunset Produce, a greenhouse grower.

Although the virtual trade show ended last Friday, all of the content from the conferences and educational workshops held during the event are available on the platform and access is free until September.

“The on-demand content, not just from United Fresh education, but also across all the exhibit booths will provide the global supply chain an opportunity to further advance their personal career developed goals in the weeks and months to come,” Michael Muzyk, president of Baldor Specialty Foods, Inc. and Chairman of United Fresh Produce Association, said in a statement sent to Abasto.

Mary Coppola, United Fresh’s vice president of marketing and communications, highlighted the continued reach of the virtual trade show. “It’s just the start of opportunity on United Fresh LIVE! The platform now serves as a robust directory of products, services, distributors, buyers, and more throughout the summer,” she said.

During the Retail-Foodservice LIVE! an event in the General Session on June 18, United Fresh celebrated the essential frontline workers in the fresh produce industry and honored the winners of the 2020 Retail Produce Manager Awards Program.

The group of 25 produce managers was selected from supermarket chains, commissaries, and independent retailers in 16 states and Canada.

The program, sponsored by the Dole Food Company, gave special recognition to produce managers who work every day on the front lines to increase sales and consumption of fresh fruits and vegetables in their stores.

Since the program’s inception in 2005, more than 325 produce managers, representing over 110 retail stores, have been honored for their contributions to the industry.

“As the face of our industry in-store, retail produce managers play a significant role in influencing a consumer’s decision to shop for fresh produce,” said Tom Stenzel, President & CEO, United Fresh Produce Association. “More so than ever before, we are extremely fortunate to have these outstanding produce managers representing our industry and working each day to deliver a positive customer experience in the produce department during the coronavirus pandemic. We’re especially grateful for their resolve in the face of this public health crisis.”

Eduardo Queirolo is the produce manager at the Fresh Market supermarket in the city of Aventura, Florida. He was born in Argentina but grew up in Lima, Perú, where he studied and graduated from college with a major in Economics.

After traveling through Latin America Queirolo moved to the United States where he finally settled down. His first job was as an employee in the produce department. There he learned how to order, restock, and display the products. “It was also in this role that fruits and vegetables began to become my passion and I wanted to learn as much as I could about the industry”.

Queirolo has been working in the industry for 34 years and has been the produce manager at The Fresh Market in Aventura, Florida for the past five years.

One thing that never fails to impress him in his work is the journey that produce takes to go from farm to store, he finds the care growers take throughout the entire process is amazing.

“Once the produce arrives at our store, it is then my job to care for it. At The Fresh Market showcase what’s fresh and best in season or bring in new varieties that our guests would love and may not find anywhere else,” Queirolo said.

About how he came to the position of produce manager, he said the process was fairly quick and smooth and he had mentors who guided him through certain areas such as management, finance, and interpersonal skills. “Without a team to support my growth I know I would not be in the position I am in today. To be a great leader, you need great guidance and structure”.

Queirolo was nominated for United Fresh’s awards by its Regional Manager, Michael Johnson. ” The Fresh Market has supported me over the years and given me the opportunity to demonstrate my efforts and talent. I was very humbled to receive this recognition. To me, being recognized at the United Fresh Live! event, it’s the equivalent of winning an OSCAR for produce managers nationwide,” he said.

José García has been working for Sprouts Farmers Market for 12 years. He is a second-generation Mexican born in San Diego, California. Since he was a child, his life has revolved around the grocery stores because his parents have their own business, where he and his five siblings have helped them with all the chores.

When García finished high school he continued working at his parents’ store, but soon after he got married he decided to look for new opportunities to grow in the grocery business. In 2008, he started working for Henry’s Farmers Market, which merged with Sprouts and where he has become one of the top fresh produce managers in the organic store chain.

As Sprouts Regional Produce All-Star, García has had the opportunity to travel around the country training employees who work in the produce department. For his exceptional work, Sprouts nominated him for the United Fresh Awards.

Garcia initially thought it was a regional competition, but when he researched and received more information about the program, he said, “Wow, this is a big deal”. The first thing he did was go to his parents and tell them he had won one of United Fresh’s 25 awards for the best produce managers in the country.

“Working with produce is something that’s in my blood, that I like to do. And it’s not just going out and picking fruit, it’s providing service to the consumer, helping each other and also having fun making the displays because it’s creative and always keeps you busy,” García said.

As a produce manager, one of the biggest challenges he has faced is the coronavirus pandemic. García has had to test all of his skills to work with his staff in the midst of the crisis and manage supplies in a strategic and safe manner while always thinking about providing the best service to his customers.

Gabriel Cabrera is a third-generation Mexican, born in Visalia, California, where he grew up and studied, but before finishing school at 17, he got married and started working to support his new family and is now a proud father of five children.

Eight years ago, he began working at Grocery Outlet in Visalia, California, where he first stock merchandise on the shelves, then performed other duties at the store, including as assistant to the produce manager. “One day he quit to go to another job, and I kept the position and have maintained it ever since, seven years ago,” Cabrera said.

Every day, from 5 a.m. to 8 a.m., Cabrera and his team in the produce department receive and organize the fruit and vegetables at the store’s counters. “I have a great team that supports me, and I have to give them credit for working in great camaraderie and a lot of coordination. And I thank Stephen and Ashley Spelman, operator-owners of Grocery Outlet, for giving me the tools to do my job well,” Cabrera said.

When he first started working for Grocery Outlet, Cabrera said he didn’t know anything about how the produce department worked, but he ended up falling in love with the job and decided to be the best. His efforts were rewarded when Michael Poore, Produce Merchandising Manager of the store chain, and the Spelmans, nominated him for the United Fresh awards and he was chosen as one of the winners.

“Getting this recognition during the United Fresh Live! virtual show means a lot to me because I feel honored that my work is not going unnoticed and I appreciate it very much,” Cabrera said.