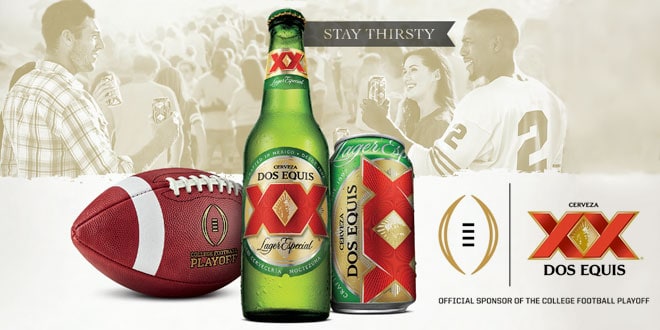 WHITE PLAINS, N.Y., (August 18 2017) — Where there is football, there is beer, and with it, fans who are passionate about both. Now in the second year of the sponsorship, Dos Equis® is placing itself front and center amongst the College Football Playoff action where football and Dos Equis® combine to enliven game day experiences enjoyed with friends and family. This September, Dos Equis® is returning as the official beer sponsor of the College Football Playoff and celebrating the fans who choose to put “Game Day Over Everything.” These passionate fans, attracted by impactful off- and on-premise POS, will be given a chance to win a VIP experience at the National Championship game in Atlanta, as well as numerous other exciting football themed prizes.

“Dos Equis® drinkers really do put game day over everything, and they like to enjoy a cold beer while doing so,” says Andrew Katz, VP of Marketing for Dos Equis. “Shoppers preparing for game day are three times more likely to purchase Dos Equis® beer for the sports viewing occasion[1], are more likely to drink Dos Equis® during key football occasions versus other leading Mexican Imports,[2] and Dos Equis® shoppers are 22% more likely to attend College football games.[3] The 2016 program drove impressive results,” continued Katz, “with sales growth in all channels, and over 1 million total units of national and localized POS placed in stores. Supported with over $12 million in media throughout the September – January season, we’ll build on this success in 2017, as we continue to strengthen our partnership with college football, offer exciting experiences to Dos Equis® drinkers, and put a statue of the Most Interesting Fan in college Football at the Hall of Fame in Atlanta, GA.”

Dos Equis® is giving college football fans more of what they want to help retailers finish the season strong: more football, more prizes, more tickets to a New Year’s Eve 6 Bowl Game of their choice. Throughout the season, Dos Equis® will keep consumers engaged with localized POS for the off- and on-premise. Off-premise elements include tailgate trunks, life size Most Interesting Man statues, and expandable case stackers to create retail theater, as well as localized base wrap, tuck cards, price cards, and cooler decals. New college football-themed tap handle toppers, back bar glorifiers, and glassware will bring the program to life on-premise. Out-of-home and digital media, and a new national TV commercial will drive awareness and heighten the drama during the Playoffs. A sweepstakes gives consumers a chance at the grand prize –to revel in college football glory at the National Championship in Atlanta, GA. The program provides off-premise cross-merchandising opportunities with channel partners, including Avocados from Mexico®, On the Border® chips and dips, and on-premise with Frank’s® RedHot® sauces.

Retailers and on-premise operators who put their support behind Dos Equis® put their support behind a winning brand – with Dos Equis® Lager continuing to grow +9%[4] –  in a winning category. What’s more, Dos Equis® buyers spend more and buy more versus other leading Mexican Imports, and has a greater number of repeat buyers and loyal drinkers versus other leading Mexican Imports;[5] a strong reason to highlight the college football partnership at retail. When promoted, Dos Equis® yields higher dollar lifts with one third of the distribution of the leading Mexican Import.4 Combining this sales velocity and momentum with the reach and passionate following of the College Football Playoffs makes for an exciting and compelling sales program. Retailers who merchandise the support tools with customized Game Day specials and focus on single-serve, can maximize this impactful, sales-driving program.