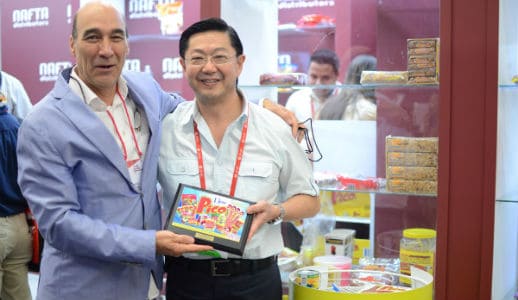 1946, marks the beginning of the ascending career of Mr. Arturo T. in the noble sweets and snacks industry.

Born in Guzman Jalisco, Mexico City, his parents were Japanese, Mr. Arturo started his adventure in his own home industry, always supported by his wife, Mrs. Carolina, producing candy and fried snacks, counting on the collaboration of only 6 people.

In 1960, Mr. Arturo acquires a facility of 3875 sq. ft., where, in addition to building his home room, also made it his local production plant, operating with the name “Guadalajara”, allowing him to increase production in peanut butter snacks line mainly, even when there were just a few machines invented and designed at the time by themselves.

The acquisition of its first automatic packing machine, in 1964, gave rise to the creation of the spicy sweet powder “PICO”, which is currently the leader of their products.
In 1971, they had a little more infrastructure and it was when Mr. Arturo acquired a plot of 9902 sq. ft., this is where the present day building is located and where its current facilities carry out its three stages production to become what they proudly are, today, in its 2 story building.

In 1972, with the trade name of “Producer Diana, S.A. de C.V.”,they begin to operate in its new facilities.

With a greater capacity for production and a fervent desire for growth, Mr. Arturo, opened his market to the Pacific route to the border with the United States, resulting in the unveiling of his products in the North American market much before the border was opened to domestic products.

In 1982, Arturo M., second son of Mr. Arturo, graduated in Industrial Engineering and systems and immediately entered the administrative area. He then took the General direction of the company, carrying out important projects for the growth of it and participating in various other businesses.

In 1991, for strategic social reasons the company changed its name to “Industria de Alimentos Diana, S.A. DE C.V.”, giving way to a new phase in the production of the spicy sweet powder “PICO”.

It is up to the month of May 1998, when Mr. Arthur M., left the the company due to strong health problems subsequently leading to his death in May 1999.

As a result of his passing, the third son of Mr. Arturo, Lic. C.P. Fernando takes the address of the company who, for a time, was dedicated to the sale and distribution of sweets wholesale by various routes of the Mexican Republic as well as to various businesses, giving him the experience to carry out interesting projects of expansion of this co