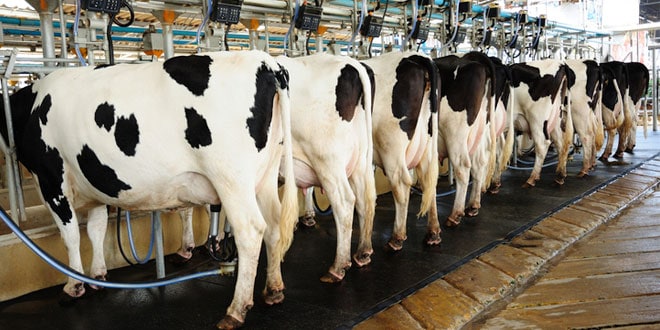 The production of milk in the United States is increasing at a pace much faster than its process, which has obligated some farmers to throw-out milk.

According to a report from CNBC, Gene Paul, legislative coordinator of National Farmers Organization based in Iowa, which markets livestock, grain and milk for its members, declared that “In Michigan and the Northeast, they’re throwing milk… they’re doing it because they simply do not have the processing power.”

Milk consumption in the United States on average is increasing between 1 and 2 percent per year, but production is rising about 3 percent.

In addition to the fact that domestic milk production is increasing faster than the capacity for processing, it is added that the total per capita consumption of liquid milk has been decreasing for some time due to competition from other beverages and because the proportion of the population of the nation that are children continues to decline, says the CNBC report.

The Department of Agriculture in the United States (USDA) recently increased its milk production forecast for 2017, noting that “the increase in milk per cow more than compensated for a slower rate of expansion of dairy cows.”

Milk producers annually produce about 3 billion pounds more than the previous year, according to a report published by CoBank. Available processing capacity, particularly in the northeastern and midwestern states, was found to “have tightened the ability of dairy cooperatives to fill the role of market balancers.”

Ken Nobis, a milkman in Central Michigan and President of the Michigan Milk Producers Association, told CNBC that, “the production in our state has grown too quickly and has grown faster than increasing global consumption.”

Nobis said that in some cases cases skim milk is thrown because it sometimes has the ability to remove butterfat from milk, but added that he still hears of “cases in which all milk was thrown out.”

The response to excessive dairy production

Abasto Media spoke with the Minnesota Milk Producers Association on the disturbing report released by CNBC on excess dairy products and that some farmers are forced to throw milk for this reason.

Lucas Sjostrom, Executive Director of the (MMPA), told Abasto that, “it is true, as a CNBC article points out, that we have a lot of milk in this country. Dairy farmers are good at producing milk and each tries to produce milk efficiently with the resources they have available, whether it is grown on their own land or on the land of another farmer.”

Sjostrom clarified that in actuality, a small part of some of the components of milk are being reused for things other than human consumption due to lack of processing capacity.

“In other words, there may be demand for the products, but we do not currently have enough capacity to use all parts of the milk in the time it takes to unload, make products and clean the plant before the process begins on the next batch.”

Milk is 87% water, so the value is in the remaining 13% of fat, protein and other solids. Therefore, a large volume of water for the most part might appear to be discarded, but dairy products continue to reach their destination.

The MMPA executive director acknowledged that raw whole milk can rarely be dumped on the farm, “but this happens as a result of inclement weather, milk truck failures, or plant breaks. And with the current situation of capacity in the plants, there may be a handful of dairies somewhere in the country who are sometimes asked to pour some or all of their milk. ”

To improve the dairy processing capacity, they are expanding plants operating in the Midwest area and plans are underway to build new milk processing facilities, Sjostrom said.

He emphasized that another way of helping to bring the supply back into line with demand is with the creation of new dairy products, which are innovative and of greater value.