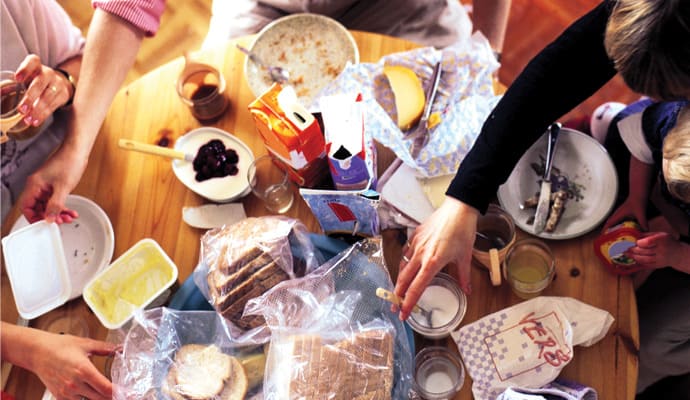 Consumers in the United States throw away 40 percent of their food every single year, an amount equal to $165 billion in food waste. That number was revealed in a report by the Natural Resources Defense Council, which claims food waste is putting a toll on water resources and increasing greenhouse gas emissions at an alarming rate.

The council found that based on current population numbers 311 million Americans waste 20 pounds of food on average per month. Based on those numbers, the average family of four wastes $1,350 to $2,275 a month.

It’s not just consumers who are wasting the product; the issue extends into the entire food chain from warehouses and buffets to school cafeterias and the family dining room.

In the report, officials note:

“Food is simply too good to waste … Given all the resources demanded for food production, it is critical to make sure that the least amount possible is needlessly squandered on its journey to our plates.”

While some of the waste comes at the supply chain level, the report still places most of the blame on the American household. Researchers proclaim:

“American families throw out approximately 25% of the food and beverages they buy.”

“Food represents a small portion of many Americans’ budgets, making the financial cost of wasting food too low to outweigh the convenience of it. This issue of wasted food is simply not on the radar of many Americans, even those who consider themselves environment- or cost-conscious.”

The American food waste problem is compounded thanks to bulk food buying, the cheap costs associated with processed food, and a consumers inability to recognize the true waste they are creating. The portion sizes for American food, especially in restaurants, also plays a major role in food waste.

At the retail level, the report found several areas that need vast improvement:

Stores overstock displays of fresh produce to give an impression of bounty, leaving items at the bottom bruised and unsellable.

They make too much ready-to-eat food. “One grocer estimated that his store threw away a full 50% of the rotisserie chickens that were prepared,” the report said.

They throw out food in damaged or outdated promotional packaging (think holiday cookies) that is still edible.

The study also found that 7 percent of planted fields are not harvested each year because they are not profitable or because demand doesn’t match supply.