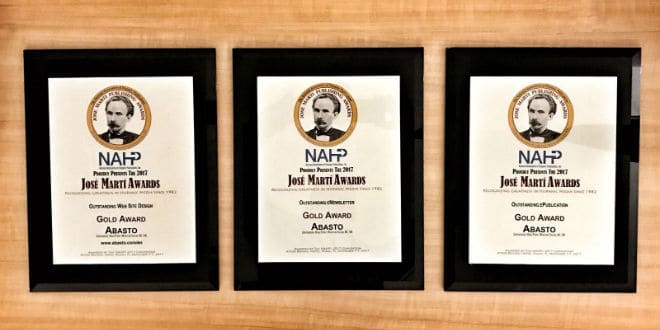 The National Association of Hispanic Publications (NAHP) held its 2017 Annual Convention in the city of Miami to recognize the work of the best Hispanic publications nationwide. Abasto Magazine won eight José Martí awards for its excellence in design and editorial.

The NAHP convention was held from November 5 to 7, attended by representatives of the main Hispanic publications in the United States. The Association, founded in 1982, promotes the work of dozens of newspapers and magazines that are published in Spanish, in 41 markets in 39 states, the District of Columbia and Puerto Rico, with a combined circulation that exceeds 23 million.

The eight José Martí awards that were presented this year to Abasto magazine are added to more than a dozen awards won by Abasto in recent years, including the best magazine in Spanish in the United States.

One Silver Award for Outstanding Inside Design Spread.

In the General Excellence category, Abasto won the Silver Award for Outstanding ePublication.

During the annual meeting of the Hispanic national publications, the organization held several workshops.

Photo gallery of the Annual Convention of the National Association of Hispanic Publications 2017 in Miami, Florida: