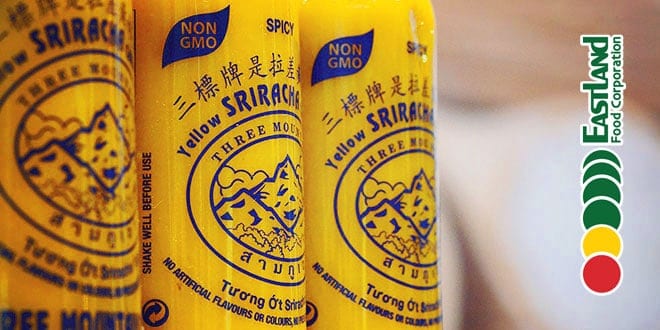 For more than two decades, red sriracha has positioned itself as one of the favorite hot sauces of the American consumer, with a steady growth even above BBQ, mayonnaise, ketchup, tabasco, etc.

The popularity of this chili sauce has grown so much that different big brands have adapted the sriracha flavor into their products. For instance, Heinz with its sriracha ketchup and Trader Joe’s sriracha flavored French Fries.

According to Quartz report published by Euromonitor, between 2000 and 2013, the hot sauce market grew 150% percent more than other American sauces like BBQ, ketchup, and mayonnaise.

In a modern and competitive market with customers demanding unique and exotic flavors, Eastland Food Corporation has developed a new kind of sriracha that is different from your traditional red sriracha. It’s called ‘Yellow Sriracha Sauce’.

Yellow Sriracha is made from authentic yellow Thai chili (not jalapeños), without any artificial coloring or flavors, 100% natural (it’s just made of five ingredients). They use the traditional way of Sun drying the chili, which gives it a unique flavor.

Yellow Sriracha made its market debut in October 2018 in different supermarket chains North East of the country. Given its quick approval, it was subsequently being sold in South and Center regions of the United States.

With this product, Eastland Food seeks to proclaim itself as a vanguardist company in the development and innovation of new products. Endorsed by nationwide renowned Chefs and foodies; the Yellow Sriracha Sauce is being considered a revolutionary chili sauce.

The reason for the development of this product was to create a sauce that would become a trend among the Millenial generation.

In a 2018 food industry trend and market research report, IBISWorld places the Millenials as the generation that will influence the growth of hot sauces in the country.

At the National Restaurant Association’s last food fair in Chicago, chef Mike Watson (Opera, Grande Hill-Chicago) told Abasto: “I love Yellow Sriracha because it’s not as spicy as the red one and it’s more versatile because you can add it to almost everything, from shellfish, chicken even as chicharrón sauce, you name it.”

Watson also added that Yellow Sriracha’s perfect spiciness concentration and that pinch of sweetness it has will be essential in American’s contemporary and fusion cuisine.

If we talk about the food industry trends, we can’t ignore this unique, daring, versatile and innovative product Yellow Sriracha Three Mountains Brand is, because, in the near future, the eyes of the world cuisine will be on this now trending new hot sauce.