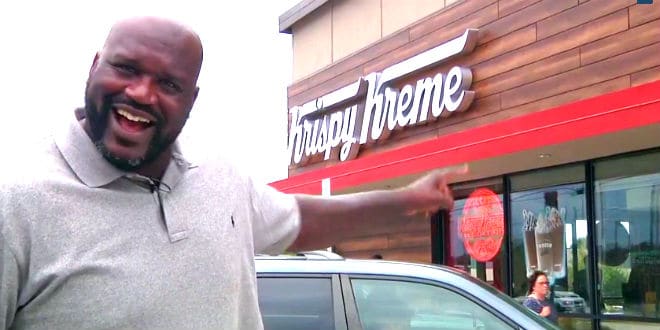 Starting today, Basketball legend Shaquille O’Neal joins Krispy Kreme in a more official capacity, as both an owner of a Krispy Kreme Doughnuts franchise and as global spokesperson for the brand.

“Krispy Kreme prides itself on spreading joy and supporting local communities, and that’s a cause that I am thrilled to be a part of,” O’Neal said. “Our goal is to help people find their happy place, and what better way than with a box of delicious Krispy Kreme doughnuts.”

“In addition to Shaquille’s status as a sports and entertainment icon and businessman, he is known for spreading joy, which aligns with our positioning and mission,” Tony Thompson, president and CEO of Krispy Kreme Doughnuts, said. “We are confident this partnership will have a big impact for us in Atlanta and around the world.”

The basketball Hall-of-Famer is a lifelong Krispy Kreme fan and is often photographed enjoying the glazed treats. Krispy Kreme counts several basketball legends among its legions of fans and, earlier this year, even released a limited-edition, doughnut-inspired basketball shoe with Nike.

In 2009, Shaq was filmed staring longingly at a glazed variety, as Mariah Carey’s “We Belong Together” played in the background. He even once asked Siri to order Charles Barkley two boxes of Krispy Kremes.

Shaquille also spent a day at Krispy Kreme headquarters in Winston-Salem, N.C., during which he said he felt like a kid in a toy store and ate doughnuts directly off the assembly line.

To celebrate the partnership, Krispy Kreme is promoting “Shaq-or-Treat” for Halloween. Anyone who tags their social media posts with #ShaqOrTreat, between Oct. 28-31, will be eligible to win Krispy Kreme or Shaq-autographed prizes.